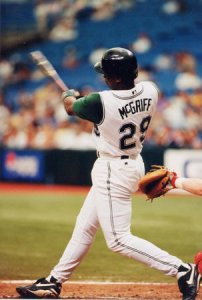 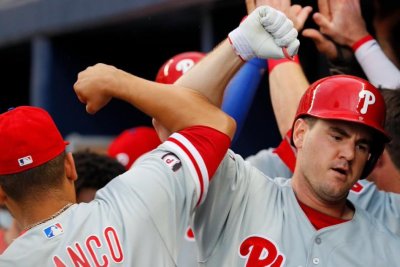 NFL // 3 years ago
Who was the best dressed athlete at the 2017 Kentucky Derby?
Big hats, mint juleps and Tom Brady. Those are quickly becoming the staples of Churchill Downs for the annual Kentucky Derby in Louisville. 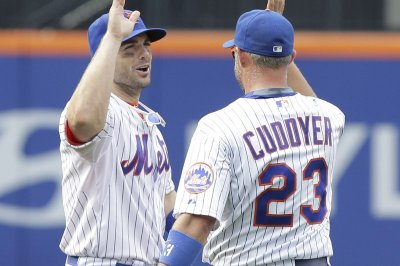 Sports News // 5 years ago
Michael Cuddyer, New York Mets beat Boston Red Sox to avoid being swept
NEW YORK -- As one of the sage veterans in the New York Mets clubhouse, left fielder Michael Cuddyer's advice remains the same whenever he senses the team is struggling.

It's the right thing to do from the team standpoint

Frederick Stanley "Crime Dog" McGriff (born October 31, 1963 in Tampa, Florida) is a former left-handed Major League Baseball player who starred for several teams from the mid-1980s until the early 2000s. A power-hitting first baseman with a tall, lanky build, the five-time All-Star became, in 1992, the first player since the dead-ball era to lead both leagues in home runs. Although he has never hit more than 37 homers in a single season, he finished his career only seven homers away from joining the exclusive 500 home run club. He won a World Series title as a first baseman with the Atlanta Braves in 1995. He currently works in the Rays' front office as an advisor. He also currently works for Catch 47 as a co-host for "The Baysball Show".

McGriff's nickname "Crime Dog" was bestowed on him by ESPN sportscaster Chris Berman, noted for his unusual and idiosyncratic player nicknames. The nickname is a play on McGruff, a cartoon dog created for American police to raise children's awareness on crime prevention. In addition, Berman would punctuate McGriff highlights by referring to them as "Crime Time", again, a wordplay referencing Berman's NFL: Primetime newscast. Unlike most of Berman's nicknames, the "Crime Dog" nickname entered into standard usage. At first, McGriff stated he would prefer "Fire Dog" (a reference to a fire in the press-box of Atlanta-Fulton County Stadium the day the Braves acquired him from the Padres; symbolically, the then-slumping Braves "caught fire" and ended up winning their division), but since has stated that he actually is fond of the "Crime Dog" nickname.

McGriff was a prospect in the New York Yankees minor league system in the early 1980s. He was drafted by the Yankees in the 9th round of the 1981 amateur draft and signed June 11, 1981. In 1982, the Yankees, in one of their famous shortsighted moves of the decade, dealt McGriff, along with Dave Collins and Mike Morgan to the Toronto Blue Jays for Dale Murray and Tom Dodd.

FULL ARTICLE AT WIKIPEDIA.ORG
This article is licensed under the GNU Free Documentation License.
It uses material from the Wikipedia article "Fred McGriff."
Back to Article
/