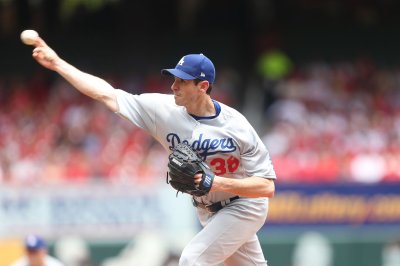 MLB // 3 years ago
Colorado Rockies' wild streak helps Los Angeles Dodgers earn 10th win in a row
In the aftermath of one of the wildest games, literally, in major league history, Colorado Rockies manager Bud Black was composed and calm.

MLB // 4 years ago
Los Angeles Dodgers top St. Louis Cardinals for sixth straight victory
Trailing 3-0 after an inning is enough to make most teams wonder about their chances of winning a game.

Franklin Rafael Gutiérrez (born February 21, 1983, in Caracas, Venezuela), nicknamed "Guti" & "Death To Flying Things", is a Major League Baseball center fielder for the Seattle Mariners. He bats and throws right-handed and is regarded as one of the game's best defensive outfielders.

In 2005, Gutiérrez posted a .261 batting average and 42 RBI for Akron, and hit .254 with seven RBI in 19 games with Triple-A Buffalo(Which are now the Columbus Clippers). Between his two minor league stops, he stole 16 bases in 22 attempts. He was among the players that the Indians called up when major league rosters expanded August 31.

FULL ARTICLE AT WIKIPEDIA.ORG
This article is licensed under the GNU Free Documentation License.
It uses material from the Wikipedia article "Franklin Gutierrez."
Back to Article
/