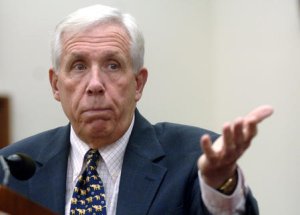 World News // 6 years ago
China accused of hacking US Weather Systems, NOAA
The NOAA's National Weather Service systems were hacked by the Chinese in late September and the agency failed to make the information public.
U.S. News // 7 years ago
At year's end: Washington starts, end 2013 working on budget matters
From the get-go, 2013 was turbulent in Washington. Crises rolled over the nation's capital like thunderheads after President Obama took his second oath of office on a crisp January day.
U.S. News // 7 years ago
Longtime GOP Rep. Frank Wolf of Virginia will not seek 18th term
U.S. Rep. Frank Wolf, R-Va., said Tuesday he will not seek election to an 18th term in Congress next year.
U.S. News // 8 years ago
House OKs bill cutting food stamps by $39 billion over 10 years
The U.S. House approved a bill Thursday that would cut $39 billion in food stamp spending over 10 years, and which the White House has said would be vetoed.
Technology // 8 years ago
House takes up Chinese cyber mantle
A House leader said he's offered an agreeable measure that would address growing concerns about cybersecurity issues regarding China.
U.S. News // 8 years ago
South New Jersey doctor killed by husband in murder-suicide
A South New Jersey doctor was killed Tuesday in her office by her estranged husband, who then turned his gun on himself, police said.
U.S. News // 8 years ago
Boehner wants Benghazi emails released
U.S. House Speaker John Boehner is calling on the White House to release unclassified emails related to the attack on the U.S. Consulate in Benghazi, Libya.
U.S. News // 8 years ago
Lawmakers seek to reclassify Fort Hood shootings as terror attack
Three members of Congress asked the U.S. Defense Department again to classify the 2009 shootings at Fort Hood, Texas, a terrorist attack.
U.S. News // 8 years ago
UPI NewsTrack TopNews
News from United Press International, around the world around the clock ...
Technology // 8 years ago
NASA researcher accused of being spy
Authorities said they arrested a NASA researcher accused of being a Chinese spy as his plane pulled away from the gate at Dulles International Airport.

Our nation must make a ... bold commitment to invest to in the future of our country by tripling the innovation budget -- federal basic research and development -- over the next decade

When people in the Carter administration and Reagan administration went to the Soviet Union, they met with the dissidents. They went into the synagogues; they went into the churches; they went into the apartments of the people. They stood with them and publicly identified with them. And that really emboldened the dissidents and also sent a message to the Soviet Union that we know who these people are and we're standing with them. (Andrei) Sakharov, (Natan) Sharansky. Where are the names of all the political prisoners? Is the ambassador speaking out

In our quest to create a better, faster, more agile FBI, we have to be careful not to trample on the rights granted to every American under the Constitution

Study: Lake Powell may not generate hydropower in 2023 due to drought

Frank Rudolph Wolf (born January 30, 1939) is the U.S. Representative for Virginia's 10th congressional district, serving since 1981. He is a member of the Republican Party.

Wolf was born in Philadelphia, Pennsylvania. He overcame a speech impediment, a stutter, early in life. He attended Pennsylvania State University where he was a member of Alpha Sigma Phi fraternity and earned a degree in political science. He received a law degree from Georgetown University Law Center. He then joined the United States Army as a reservist and became a lawyer for the military.

Wolf got his start in politics when he became a legislative assistant to U.S. Representative Edward Biester, beginning in 1968. From 1971 to 1975, Wolf served as an assistant to Secretary of the Interior Rogers Morton.

FULL ARTICLE AT WIKIPEDIA.ORG
This article is licensed under the GNU Free Documentation License.
It uses material from the Wikipedia article "Frank Wolf."
Back to Article
/