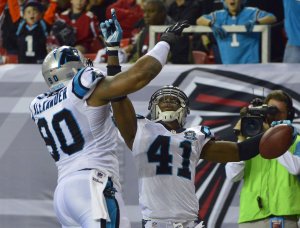 Sports News // 5 years ago
NFL suspends Panthers DE Frank Alexander for year
The NFL on Tuesday suspended Carolina Panthers defensive Frank Alexander without pay for a minimum of one year for violating the Policy and Program for Substances of Abuse for a third time.

I set him up for an anticipated hole and he aimed for it because there was plenty of room. He's a brave little guy, but also very talented

Frank Alexander (May 25, 1879 - September 8, 1937) was an American silent film comedian and actor. Alexander, who was morbidly obese (350 pounds), was best known for playing villains in the films of Larry Semon, who are often the father of Semon's love interest.

He is best known to contemporary audiences for portraying a villainous interpretation of Uncle Henry, eventually proclaimed "Prince of Whales" upon reaching the Emerald City in Semon's Wizard of Oz. He was also part of the comedy team called "A Ton Of Fun" with two other large actors, Kewpie Ross and Hilliard Karr.

Richard M. Roberts's article in Classic Images listed the top ten ingredients of a Larry Semon film, which began with these four:

FULL ARTICLE AT WIKIPEDIA.ORG
This article is licensed under the GNU Free Documentation License.
It uses material from the Wikipedia article "Frank Alexander."
Back to Article
/