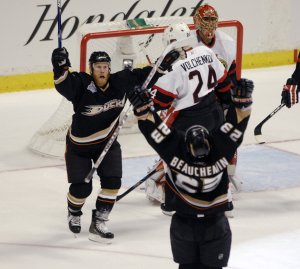 François Beauchemin (born June 4, 1980) is a Canadian professional ice hockey defenceman and an alternate captain of the Toronto Maple Leafs of the National Hockey League (NHL).

Beauchemin played major junior hockey in the Quebec Major Junior Hockey League (QMJHL) for four season with the Laval Titan Collège Français, Acadie-Bathurst Titan and Moncton Wildcats. In his draft year, he recorded 47 points in 70 games with Laval. He was then drafted 75th overall by the Montreal Canadiens in the 1998 NHL Entry Draft. Upon being drafted, he returned to the QMJHL for two more seasons, helping Acadie-Bathurst to a President's Cup in 1999 as league champions.

Turning pro in 2000–01, Beachemin spent four seasons with the Canadiens organization playing between several minor league affiliates. He made his NHL debut in 2002–03, appearing in 1 game for the Canadiens. On September 14, 2004, Beauchemin was placed on waivers and claimed by the Columbus Blue Jackets. As NHL play was suspended due to the lockout, he spent the 2004–05 season with the Blue Jackets American Hockey League (AHL) affiliate, the Syracuse Crunch.

FULL ARTICLE AT WIKIPEDIA.ORG
This article is licensed under the GNU Free Documentation License.
It uses material from the Wikipedia article "Francois Beauchemin."
Back to Article
/