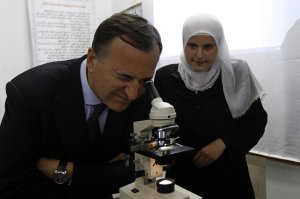 With respect to NATO, it is fair to ask for more detailed information on results as well as clear and precise position on the dramatic errors affecting civilians, since this is clearly not NATO's mission

Italy is on board on training police, on contributing to local development, in dealing with cross-border issues, and working together with partners ... on transition of powers to Afghanistan's authorities

Wisconsin Republicans vote not to endorse in gubernatorial primary

Franco Frattini (born 14 March 1957 in Rome) is an Italian politician, currently serving as Italy's Foreign minister in the Berlusconi Cabinet. Before 8 May 2008 he served as European Commissioner for Justice, Freedom and Security and one of five vice-presidents of the 27-member Barroso Commission.

Initially a member of the Italian Socialist Party, Frattini has been a member of Silvio Berlusconi's government since 2001, and Foreign minister of Italy since 14 November 2002; he is also a member of the centre-right party People of Freedom.

On 4 November 2004, he was nominated to take up the Justice and security portfolio in the Commission, in place of the controversial Rocco Buttiglione (who outed Frattini as a Freemason). His resignation from the Italian government took effect on 18 November. Deputy Prime Minister Gianfranco Fini succeeded him as Foreign Minister. Frattini has outlined his key priorities as: fundamental Rights and citizenship; the fight against terrorism and organised crime; immigration and asylum, visa and border issues; closer co-operation between police, judicial and customs authorities; ensuring all EU citizens have the same access to justice; and the Rights of the Child.

FULL ARTICLE AT WIKIPEDIA.ORG
This article is licensed under the GNU Free Documentation License.
It uses material from the Wikipedia article "Franco Frattini."