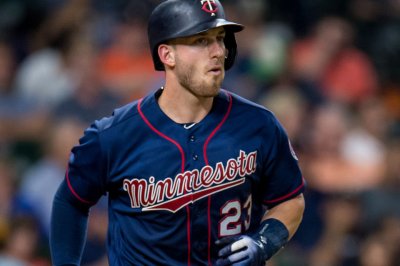 MLB // 2 years ago
Tigers' Martinez bids farewell to Cleveland
CLEVELAND -- Victor Martinez's first major league at bat came at age 23 as a member of the Cleveland Indians on Sept. 10, 2002, in what was known as Jacobs Field.

MLB // 2 years ago
Hot Torres, Yankees wrap up series with Tigers
NEW YORK -- For the past two weeks, Gleyber Torres has played shortstop for the New York Yankees.

MLB // 2 years ago
Happ looks to stay perfect as a Yankee vs. Tigers
NEW YORK -- With the exception of a brief absence due to hand, foot and mouth disease, everything has gone well in J.A. Happ's first month on the mound for the New York Yankees.

MLB // 2 years ago
Daniel Murphy could make Chicago Cubs debut vs. Detroit Tigers
The Chicago Cubs' offense needed a boost. Adding one of the league's best left-handed bats should certainly help the cause.

MLB // 2 years ago
A's aim to take down Tigers yet again
OAKLAND, Calif. -- The Oakland Athletics will be seeking to complete a season-series sweep over a second consecutive opponent when they face the Detroit Tigers for the seventh and final time Sunday afternoon.

What were hoping is that Dr. (Lewis) Yocum will determine what the problem is and give us a solution

Liriano signed with the San Francisco Giants as an international free agent in 2000. He was traded along with pitchers Joe Nathan and Boof Bonser in exchange for catcher A. J. Pierzynski (now of the Chicago White Sox). Often compared to former teammate Johan Santana, another hard-throwing lefty, Liriano was touted as one of the "super-prospects" within the Minnesota Twins organization. In 2005, he led all minor league pitchers in strikeouts, with 204. He made his major league debut in relief on September 5, 2005, against the Texas Rangers. He later joined the Twins' starting rotation and won his first game on September 30, 2005, against the Detroit Tigers. Liriano started the 2006 season in Minnesota's bullpen, but was promoted to the starting rotation in May, exchanging positions with struggling starter Carlos Silva. He won each of his first three starts.

After a 12-3 start to the 2006 season, which included two Rookie of the Month nods and a spot on the American League All-Star roster, Liriano led the Major Leagues with a 2.19 ERA, statistics putting him in discussion for both the American League Cy Young and Rookie of the Year awards, but a trip to the disabled list on August 11 left him with too few innings to qualify as the league's official ERA leader and jeopardized his chances at any such awards in 2006. On August 1, 2006, Liriano was scratched from his scheduled August 2 start because of forearm inflammation after a bullpen session. He missed one start before resuming bullpen work without pain, but was placed on the disabled list after continued arm pain during his last start on August 7, 2006. Liriano began a rehabilitation program on August 22, and threw off a mound for the first time on August 30, throwing only his fastball and changeup, and said that he would like to pitch his breaking ball later that week. Liriano made a rehab start for the Rochester Red Wings on September 9, throwing 40 pitches for four strikeouts and one walk in three shutout, hitless innings. After the game, Liriano reported feeling no pain in his elbow and was reactivated by the Twins.

FULL ARTICLE AT WIKIPEDIA.ORG
This article is licensed under the GNU Free Documentation License.
It uses material from the Wikipedia article "Francisco Liriano."
Back to Article
/