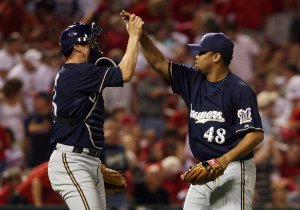 Francisco Javier Cordero (born May 11, 1975 in Santo Domingo, Dominican Republic) is a Major League Baseball relief pitcher for the Cincinnati Reds. Cordero is frequently referred to by his nickname, CoCo, which is a combination of the last two letters of his first name and the first two letters of his last name.

Cordero throws a hard fastball—capable of reaching the upper 90s, and also has an excellent slider that he can throw for strikes early in the count, and which he uses as his outpitch. On June 1, 2011, Cordero recorded his 300th career save, becoming only the 22nd player to reach that mark.

FULL ARTICLE AT WIKIPEDIA.ORG
This article is licensed under the GNU Free Documentation License.
It uses material from the Wikipedia article "Francisco Cordero."
Back to Article
/