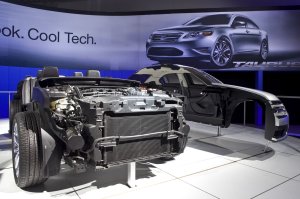 U.S. News // 2 years ago
Ford blames tariffs in decision to scrap Focus crossover import
The made-in-China Ford Focus Active crossover vehicle will not be sold in the United States because of tariff issues, the Ford Motor Co. said Friday.

Energy News // 2 years ago
Plug-in vehicles not yet straining U.S. grid
Plug-in electric vehicles aren't yet putting a strain on the national grid, but may require upgrades to infrastructure as demand increases, a U.S. report found.

U.S. News // 3 years ago
Ford to invest $1.2B in Michigan factories
Ford announced it will invest $1.2 billion in three factories in Michigan that were part of negotiations two years ago with the United Auto Workers Union.

The Ford Focus is a small family car manufactured by Ford and marketed globally since its introduction in 1998 in Europe, 2000 in North America, and 2002 in Australia. First generation models continued in production in North America through 2007 (with an interim re-styling) and remain in production currently in South America (e.g., Brazil, Argentina). A second generation launched in Europe in January 2005, received styling and engineering updates in January 2008, and is marketed globally outside North and South America.

FULL ARTICLE AT WIKIPEDIA.ORG
This article is licensed under the GNU Free Documentation License.
It uses material from the Wikipedia article "Ford Focus."
Back to Article
/