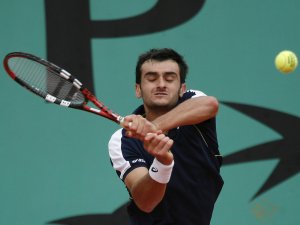 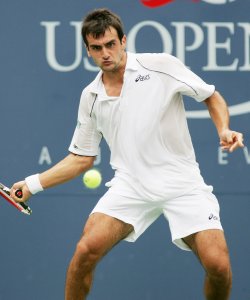 Florent Lucien Serra (born 28 February 1981 in Bordeaux, France) is a French male tennis player. A right-hander, he has won two ATP titles during his career and is coached by Pierre Cherret.

Serra was born in Bordeaux, in the southwest of France, in 1981 to Jean-Luc and Martine. He started playing tennis at the age of seven at a tennis club in Bordeaux after his father got him involved. After completing his A-level equivalent (the French "bac") with a major in Economics at 18, Serra left Bordeaux for Paris, to train under the national training program at Roland Garros. As a result of playing minimal junior tournaments, his career high junior ranking was no. 437 on 31 December 1999. He turned pro in 2000.

From 2000 to 2002, he reached six Futures finals, winning one of them, along with reaching his first Challenger final. He made his debut on the ATP Tour in 2003. In 2005 he had his most successful year, winning three out of four Challenger finals, and his first ATP tour title, in Bucharest. He won his second title the following year in Adelaide. In 2009, he was a runner-up in Casablanca. He has been coached by Pierre Cherret since he was a junior player, and his fitness trainer is Paul Quetin.

FULL ARTICLE AT WIKIPEDIA.ORG
This article is licensed under the GNU Free Documentation License.
It uses material from the Wikipedia article "Florent Serra."
Back to Article
/