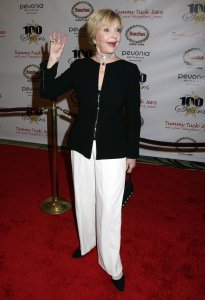 Top News // 4 years ago
The Almanac
On Feb. 14, 1929, in what became known as the "St. Valentine's Day Massacre," gunmen believed to be working for Prohibition-era crime boss Al Capone killed seven members of the rival George "Bugs" Moran gang in a Chicago garage.

Entertainment News // 4 years ago
'Brady Bunch' matriarch Florence Henderson dead at 82
Actress Florence Henderson died of heart failure in a Los Angeles hospital on Thursday, surrounded by her four children. She was 82.
TV // 6 years ago
'Love Boat' cast reunites for ship christening in Florida
Six of the original cast members of TV's "The Love Boat" served as the godparents at the christening of Princess Cruises' newest ship in Florida.
Sports News // 6 years ago
UPI horse racing roundup
Next year's Kentucky Derby hopefuls get in some early licks in weekend Thoroughbred racing.

Florence Agnes Henderson (born February 14, 1934) is an American actress and singer, best known for playing the role of Carol Brady in the television program The Brady Bunch, which ran from 1969 to 1974. As of 2010, she hosts the American TV talk show The Florence Henderson Show.

Henderson, the youngest of ten children, was born in Dale, Indiana, a small town in the deep south of the state. Henderson was the daughter of Elizabeth (née Elder), a homemaker, and Joseph Henderson, a tobacco sharecropper. Raised a Roman Catholic, she graduated from St. Francis Academy in Owensboro, Kentucky, in 1951; shortly thereafter, she went to New York City, enrolling in the American Academy of Dramatic Arts. She is an Alumna Initiate of the Alpha Chi chapter of Delta Zeta Sorority.

Henderson started her career on the stage, performing in musicals, such as the touring production of Oklahoma! and South Pacific at Lincoln Center. She debuted on Broadway in the musical Wish You Were Here in 1952 and later starred on Broadway in the long-running 1954 musical, Fanny (888 performances) in which she originated the title role. Henderson also appeared on Broadway in The Girl Who Came to Supper (1963). In 1962, she won the Sarah Siddons Award for her work in Chicago Theatre, and the same year became the first woman to guest host The Tonight Show Starring Johnny Carson. She also joined the ranks of what was then called "The Today Girl" on NBC's long running morning show, doing weather and light news, a position also once held by Barbara Walters.

FULL ARTICLE AT WIKIPEDIA.ORG
This article is licensed under the GNU Free Documentation License.
It uses material from the Wikipedia article "Florence Henderson."
Back to Article
/