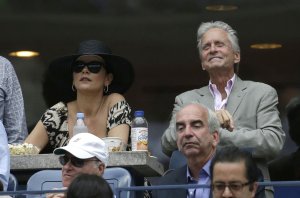 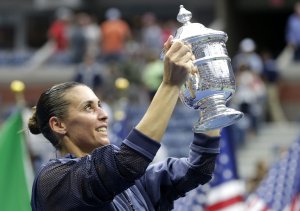 Tennis // 5 years ago
U.S. Open 2016: Caroline Wozniacki, Roberta Vinci breeze into third round
Seventh-seeded Roberta Vinci, the 2015 U.S. Open runner-up, cruised into the third round of the tournament for the sixth straight year on Wednesday.

Tennis // 5 years ago
U.S. Open tennis draw 2016: Serena Williams gets tough 1st round match
Serena Williams and Novak Djokovic secured the top seeds for the 2016 U.S. Open when the draw was revealed Friday.

Sports News // 6 years ago
Maria Sharapova, Agnieszka Radwanska advance at WTA Finals
Maria Sharapova finished a perfect 3-0 in round robin play to advance to the semifinals of the WTA Finals in Singapore.

Sports News // 6 years ago
Flavia Pennetta wins U.S. Open before retiring
Flavia Pennetta produced the biggest accomplishment of her tennis career and then announced her retirement.

Sports News // 6 years ago
Slam-dunked: Serena upset by unseeded Vinci, falls short of historic feat
Two victories from history,Serena Williams fell in a spectacular upset at the US Open Friday, to an unseeded Italian who's never before played in a major final.

Sports News // 6 years ago
Kevin Anderson upsets Andy Murray in 4th round of U.S. Open
Another men's tennis star was eliminated from the U.S. Open on Monday.

It's a very long season and we're all very tired

It always feels better to play the last point and have the sensation of winning, but injuries happen

Flavia Pennetta (born 25 February 1982 in Brindisi, Apulia) is an Italian professional tennis player. She became Italy's first top 10 female singles player on 17 August 2009 and also the first ever Italian Tennis player to be ranked No.1 in Doubles on 28 February 2011. As of 19 August 2011, Pennetta is ranked World No. 25 in singles and World No. 4 in doubles.

Pennetta has won nine career WTA singles titles, including back-to-back titles in Bogotá and Acapulco in 2005. She and her Italian teammates Mara Santangelo, Francesca Schiavone, and Roberta Vinci beat the Belgium team 3–2 in the 2006 Fed Cup final. Justine Henin had to retire in the fifth and final match due to an injury in her right knee, which let Italy win their first Fed Cup trophy. She was also a member of their winning team in 2009 and 2010, when they beat the United States on both occasions.

FULL ARTICLE AT WIKIPEDIA.ORG
This article is licensed under the GNU Free Documentation License.
It uses material from the Wikipedia article "Flavia Pennetta."