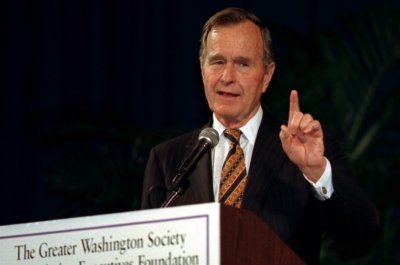 Top News // 4 years ago
The Almanac
On April 27, 1993, Kuwait said it foiled an Iraqi plot to assassinate former President George H.W. Bush during his visit earlier in the month.

Top News // 4 years ago
The Almanac
On Nov. 28, 1942, a fire at the Cocoanut Grove nightclub in Boston killed 492 people. Most victims suffocated or were trampled to death.
Special Reports // 9 years ago
Australian priest found dead in Cebu river
Police are investigating the death of an Australian priest found floating in a river on the southern island province of Cebu, the Manila Times said.
Science News // 1 decade ago
Hubble details two open star clusters
NASA's Hubble Space Telescope has captured the most detailed images to date of the open star clusters NGC 265 and NGC 290 in the Small Magellanic Cloud.
Odd News // 1 decade ago
Book claims Chinese discovered America
Scattered evidence that Chinese explorers "discovered" America 71 years before Christopher Columbus and circumnavigated the earth 60 years before Ferdinand Mage

Ferdinand Magellan (Portuguese: Fernão de Magalhães, IPA: ; Spanish: Fernando de Magallanes, IPA: ; c. 1480 – April 27, 1521) was a Portuguese explorer. He was born in Sabrosa, in northern Portugal, and served King Charles I of Spain in search of a westward route to the "Spice Islands" (modern Maluku Islands in Indonesia).

Magellan's expedition of 1519–1522 became the first expedition to sail from the Atlantic Ocean into the Pacific Ocean (then named "peaceful sea" by Magellan; the passage being made via the Strait of Magellan), and the first to cross the Pacific. It also completed the first circumnavigation of the Earth, although Magellan himself did not complete the entire voyage, being killed during the Battle of Mactan in the Philippines. For background see Exploration of the Pacific.

Magellan also gives his name to the Magellanic Penguin, which he was the first European to note, and the Magellanic clouds, now known to be nearby dwarf galaxies.

FULL ARTICLE AT WIKIPEDIA.ORG
This article is licensed under the GNU Free Documentation License.
It uses material from the Wikipedia article "Ferdinand Magellan."
Back to Article
/