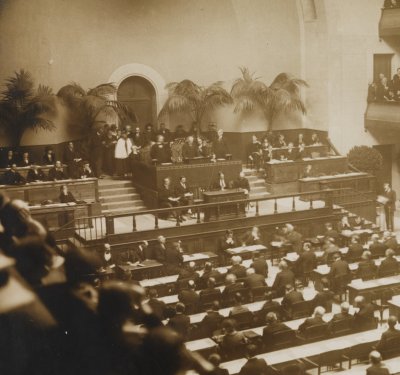 Frankfurter was born into a Jewish family on November 15, 1882, in Vienna, Austria, then part of the Austro-Hungarian Empire in Europe. He was the third of six children of Leopold and Emma (Winter) Frankfurter. His forebears had been rabbis for generations. In 1894, when he was twelve, his family immigrated to the United States, where he learned English growing up on New York City's Lower East Side. Frankfurter attended P.S. 25 where he excelled at his studies and enjoyed chess and crap shooting on the street. He spent many hours reading at The Cooper Union as well as attending political lectures, usually on subjects such as trade unionism, socialism, and communism.

After graduating from City College of New York (where he was inducted into Phi Beta Kappa) in 1902, Frankfurter worked for the Tenement House Department of New York City in order to raise money for law school. He applied successfully to Harvard Law School, where he excelled academically and socially. He became lifelong friends with Walter Lippmann and Horace Kallen, became an editor of the Harvard Law Review, and was graduated with one of the best academic records since Louis Brandeis.

FULL ARTICLE AT WIKIPEDIA.ORG
This article is licensed under the GNU Free Documentation License.
It uses material from the Wikipedia article "Felix Frankfurter."
Back to Article
/