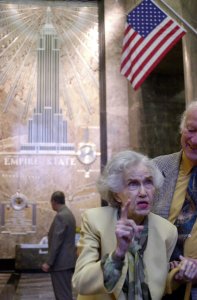 Top News // 5 years ago
The Almanac
On Sept. 15, 1963, four black girls were killed in the bombing of a church in Birmingham, Ala. Two black teenage boys were shot to death later that day as citywide rioting broke out.

Although he had tremendous strength and power to destroy, some kind of instinct made him appreciate what he saw as beautiful

I find it not acceptable when people blame Hollywood for the things that happen to them. Films are wonderful. I've had a beautiful life because of films

Fay Wray (born Vina Fay Wray; September 15, 1907 – August 8, 2004) was a Canadian-American actress most noted for playing the lead in King Kong. Through an acting career that spanned 57 years, Wray attained international stardom as an actress in horror film roles, leading to many considering her as the first "scream queen".

After appearing in minor film roles, Wray gained media attention being selected as one of the "WAMPAS Baby Stars". This led to Wray being signed to Paramount Pictures as a teenager, where she made more than a dozen films. After leaving Paramount, she signed deals with various film companies, being cast in her first horror film roles among many other types of roles, including in The Bowery (1933) and Viva Villa (1934), both huge productions starring Wallace Beery. For RKO Radio Pictures, Inc., she starred in the film with which she is most identified, King Kong (1933). After the success of King Kong, Wray appeared in many major film roles and on television, finishing her acting career in 1980.

Wray, a descendant of both Springfield, Massachusetts settler William Pynchon and Mormon pioneers, was born on a ranch near Cardston, Alberta, Canada to two Mormons, Elvina Marguerite Jones, who was from Salt Lake City, and Joseph Heber Wray, who was from Kingston upon Hull, England. She was one of six children. Her family returned to the United States a few years after she was born; they moved to Salt Lake City in 1912 and moved to Lark, Utah in 1914. In 1919, they moved to Salt Lake City again, before moving to Hollywood, California, where Fay attended Hollywood High School.

FULL ARTICLE AT WIKIPEDIA.ORG
This article is licensed under the GNU Free Documentation License.
It uses material from the Wikipedia article "Fay Wray."