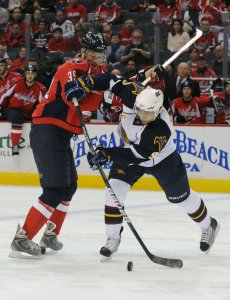 Evander Kane (born August 2, 1991) is a Canadian professional ice hockey centre with the Atlanta Thrashers of the National Hockey League (NHL). Selected fourth overall in the 2009 NHL Entry Draft by the Thrashers, he was drafted from the Vancouver Giants of the Western Hockey League (WHL).

During his major junior career, he won the Memorial Cup with the Giants in 2007, finished as runner-up for the Jim Piggott Memorial Trophy as WHL rookie of the year in 2008 and was named to the WHL West First All-Star Team in 2009. Kane also set the Giants' franchise record for single-season goals in 2008–09.

Internationally, Kane has won gold medals with Team Canada at the 2008 Ivan Hlinka Memorial Tournament and 2009 World Junior Championships. He has also competed in the 2010 IIHF World Championship.

FULL ARTICLE AT WIKIPEDIA.ORG
This article is licensed under the GNU Free Documentation License.
It uses material from the Wikipedia article "Evander Kane."
Back to Article
/