Entertainment News // 1 month ago
SAG Awards: How to watch, what to expect
The 27th Screen Actors Guild Awards will air Sunday at 9 p.m. EDT on TNT and TBS.

Entertainment News // 3 months ago
Golden Globes: A recap of recent interviews with nominees
Jason Sudeikis, Kaley Cuoco, Bob Odenkirk, Sarah Paulson and other stars have recently spoken with UPI about their craft and the films and TV shows that garnered Golden Globe nominations Wednesday. Here's a recap.

Top News // 4 months ago
The Almanac
On Dec. 17, 1989, "The Simpsons," which began as a feature of The Tracy Ullman Show, had its first stand-alone episode broadcast. 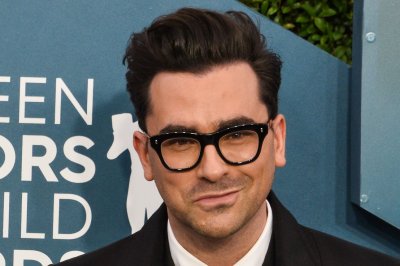 TV // 7 months ago
Dan Levy on 'Schitt's Creek' returning: 'I hope we do in some capacity'
The cast of "Schitt's Creek" appeared on "Jimmy Kimmel Live" to discuss the series winning big at the Emmys and if the comedy will ever return.

Eugene Levy (born December 17, 1946) is a Canadian actor, television director, producer, musician and writer. He is known for his work in Canadian television series, American movies and television movies. He is the only person to star all of the American Pie movies (American Pie, American Pie 2, American Wedding, Band Camp, The Naked Mile, Beta House, and The Book of Love).

Levy was born to a Jewish family in Hamilton, Ontario. His father was a foreman in an automobile plant. He went to Westdale Secondary School, and graduated from McMaster University in 1969. He was vice president of the McMaster Film Board, a student film group where he met moviemaker Ivan Reitman.

FULL ARTICLE AT WIKIPEDIA.ORG
This article is licensed under the GNU Free Documentation License.
It uses material from the Wikipedia article "Eugene Levy."
Back to Article
/