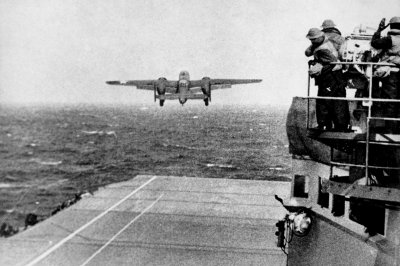 Top News // 4 years ago
The Almanac
On Aug. 3, 1981, U.S. air traffic controllers went on strike. The strikers were fired within one week.

In the end, they are the guys that war cannot be won without

Ernest Taylor Pyle (August 3, 1900 – April 18, 1945) was an American journalist who wrote as a roving correspondent for the Scripps Howard newspaper chain from 1935 until his death in combat during World War II. He won the Pulitzer Prize in 1944. His articles, about the out-of-the-way places he visited and the people who lived there, were written in a folksy style, much like a personal letter to a friend. He enjoyed a following in some 300 newspapers.

Pyle was born on a tenant farm near Dana, Indiana. When he was almost 18, he joined the United States Navy Reserve. World War I ended soon after, so Pyle served for only three months.

After the war, Pyle attended Indiana University, traveled to the Orient with his fraternity brothers of Sigma Alpha Epsilon, and edited the student newspaper. However, he didn't graduate and instead, with only a semester left at Indiana, he accepted a job at a paper in LaPorte, Indiana. He worked there for three months before moving to Washington, D.C. A tabloid newspaper, The Washington Daily News, founded in 1921, had hired Pyle as a reporter. All of the editors were young, including Editor-in-Chief John M. Gleissner (one of Warren G. Harding's drinking buddies); Lee G. Miller (author of An Ernie Pyle Album - Indiana to Ie Shima); Charles M. Egan, Willis "June" Thornton; and Paul McCrea. Pyle was named managing editor of the Washington Daily News and served in the post for three years, all the while fretting that he was unable to do any writing.

FULL ARTICLE AT WIKIPEDIA.ORG
This article is licensed under the GNU Free Documentation License.
It uses material from the Wikipedia article "Ernie Pyle."
Back to Article
/