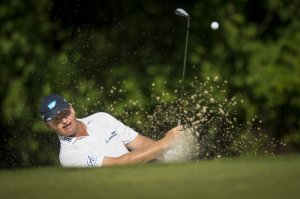 Sports News // 2 years ago
Presidents Cup golf: U.S. closes gap vs. Internationals
The United States team narrowed its deficit against the International squad by one point in the third round of the 2019 Presidents Cup Saturday in Melbourne.

Sports News // 2 years ago
Presidents Cup golf: U.S. gains momentum behind Tiger Woods, Justin Thomas
The International team still led by three after the second round of the 2019 Presidents Cup, but the Americans picked up some late momentum Friday at Royal Melbourne Golf Club in Melbourne.

I really didn't know what was happening at the end

I just missed the cut here, I hope they're happy over there

The last two years, I haven't been where I think I should be

Theodore Ernest "Ernie" Els (English pronunciation: /ˈɛls/; born 17 October 1969) is a South African professional golfer, who has been one of the top professional players in the world since the mid-1990s. A former World No. 1, he is known as "The Big Easy" due to his imposing physical stature (he stands 1.91 metres ) along with his fluid, seemingly effortless golf swing. Among his numerous victories are three major championships: the U.S. Open in 1994 at the Oakmont Country Club and 1997 at the Congressional Country Club, and The Open Championship in 2002 at Muirfield.

Other highlights in Els' career include topping the 2003 and 2004 European Tour Order of Merit (money list), and winning the World Match Play Championship a record seven times. He is the leading career money winner on the European Tour, and was the first member of the tour to earn over 25 million Euros from European Tour events. He has held the number one spot in the Official World Golf Rankings and holds the record for weeks ranked in the top ten with over 780. Els was elected to the World Golf Hall of Fame in 2010, on his first time on the ballot, and was inducted in May 2011.

Growing up just east of Johannesburg in Kempton Park, South Africa, he played rugby union, cricket, tennis, and, starting at age 8, golf. He was a skilled junior tennis player and won the Eastern Transvaal Junior Championships at age 13. Els learned the game of golf at the Kempton Park Country Club where he started carrying for his father, Neels. He was soon playing better than his father (and his older brother, Dirk), and by the age of 14 he was a scratch handicap. It was around this time that he decided to focus exclusively on golf.

FULL ARTICLE AT WIKIPEDIA.ORG
This article is licensed under the GNU Free Documentation License.
It uses material from the Wikipedia article "Ernie Els."