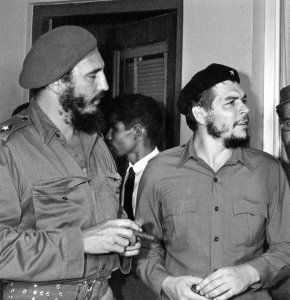 Voices // 2 months ago
U.S. could face simmering, chronic domestic terror problem
After President Joe Biden took office on Wednesday without any violent incidents, many in the United States and worldwide breathed a sigh of relief. The respite may be brief.

World News // 3 years ago
Korean Cubans grapple with the legacy of a divided country
When Joseph Juhn first traveled to Cuba in 2015, the driver who was waiting for him at the airport in Havana expected to pick up a Canadian national.

Odd News // 3 years ago
Salem mayor spots 'eerie' face in street lamp
The mayor of Salem, Mass., tweeted a photo of what appears to be a ghostly face in a street lamp, and Twitter went wild with the possibilities.

Voices // 4 years ago
One woman's tale of being radicalized by 'utopian' promises
Yasmin Mulbocus was radicalized in the 1990s when she was 17, disillusioned and full of rage.

U.S. News // 5 years ago
Mexican news anchor Jacobo Zabludovsky dead at 87
Jacobo Zabludovsky, longtime anchor for Mexico's Televisa network, died Thursday of complications from a stroke, the network announced. He was 87.
U.S. News // 7 years ago
Prize French bulldog, 2 litters of puppies stolen in Miami
A French bulldog, the prize stud of a Miami breeder, and 15 puppies he sired have been stolen, police said.
Outside View // 7 years ago
Outside View: Why U.S. is losing Iraq and why Iran can't afford to
At times in U.S. history its leaders failed to "get the message" of a national security threat, suffering dire consequences as a result.
Odd News // 7 years ago
Italian winemaker says Hitler, Mussolini bottles 'joke gift'
An Italian winemaker who sells bottles of the beverage featuring pictures of Adolf Hitler and Benito Mussolini said the products are meant as "a joke gift."

As a medical student, Guevara traveled throughout Latin America and was transformed by the endemic poverty he witnessed. His experiences and observations during these trips led him to conclude that the region's ingrained economic inequalities were an intrinsic result of capitalism, monopolism, neocolonialism, and imperialism, with the only remedy being world revolution. This belief prompted his involvement in Guatemala's social reforms under President Jacobo Arbenz, whose eventual CIA-assisted overthrow solidified Guevara's radical ideology. Later, while living in Mexico City, he met Raúl and Fidel Castro, joined their 26th of July Movement, and travelled to Cuba aboard the yacht, Granma, with the intention of overthrowing U.S.-backed Cuban dictator Fulgencio Batista. Guevara soon rose to prominence among the insurgents, was promoted to second-in-command, and played a pivotal role in the successful two year guerrilla campaign that deposed the Batista regime.

Following the Cuban Revolution, Guevara performed a number of key roles in the new government. These included instituting agrarian reform as minister of industries, serving as both national bank president and instructional director for Cuba’s armed forces, reviewing the appeals and firing squads for those convicted as war criminals during the revolutionary tribunals, and traversing the globe as a diplomat on behalf of Cuban socialism. Such positions allowed him to play a central role in training the militia forces who repelled the Bay of Pigs Invasion and bringing to Cuba the Soviet nuclear-armed ballistic missiles which precipitated the 1962 Cuban Missile Crisis. Additionally, he was a prolific writer and diarist, composing a seminal manual on guerrilla warfare, along with a best-selling memoir about his youthful motorcycle journey across South America. Guevara left Cuba in 1965 to foment revolution abroad, first unsuccessfully in Congo-Kinshasa and later in Bolivia, where he was captured by CIA-assisted Bolivian forces and executed.

FULL ARTICLE AT WIKIPEDIA.ORG
This article is licensed under the GNU Free Documentation License.
It uses material from the Wikipedia article "Ernesto Che Guevara."
Back to Article
/