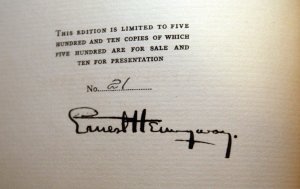 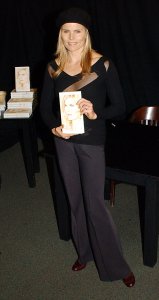 Top News // 3 years ago
The Almanac
On July 21, 1969, U.S. astronauts Neil Armstrong and Edwin "Buzz" Aldrin, lifted off from the moon in the Apollo 11 lunar module Eagle.

I want to kiss you forever and a day ... I can't love you more than I do or deeper or longer

What sort of cigarette you smoke in picture so I can get a package and roll them up and put them under my armpit. That's the only way I like tobacco really. But I guess it wouldn't go good in the ads

Ernest Miller Hemingway (July 21, 1899 – July 2, 1961) was an American author and journalist. His distinctive writing style, characterized by economy and understatement, influenced 20th-century fiction, as did his life of adventure and his public image. He produced most of his work between the mid-1920s and the mid-1950s. He won the Nobel Prize in Literature in 1954. Many of his works are classics of American literature. He published seven novels, six short story collections, and two non-fiction works during his lifetime; a further three novels, four collections of short stories, and three non-fiction works were published posthumously.

Hemingway was born and raised in Oak Park, Illinois. After leaving high school he worked for a few months as a reporter for The Kansas City Star, before leaving for the Italian front to become an ambulance driver during World War I, which became the basis for his novel A Farewell to Arms. In 1918, he was seriously wounded and returned home within the year. In 1922 Hemingway married Hadley Richardson, the first of his four wives, and the couple moved to Paris, where he worked as a foreign correspondent. During his time there he met and was influenced by modernist writers and artists of the 1920s expatriate community known as the "Lost Generation". His first novel, The Sun Also Rises, was published in 1926.

After divorcing Hadley Richardson in 1927 Hemingway married Pauline Pfeiffer; they divorced following Hemingway's return from covering the Spanish Civil War, after which he wrote For Whom the Bell Tolls. Martha Gellhorn became his third wife in 1940; they split when he met Mary Welsh in London during World War II. During the war he was present at D-Day and the liberation of Paris.

FULL ARTICLE AT WIKIPEDIA.ORG
This article is licensed under the GNU Free Documentation License.
It uses material from the Wikipedia article "Ernest Hemingway."