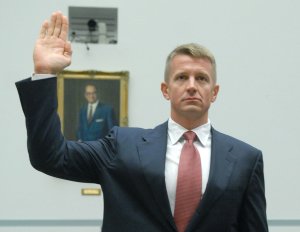 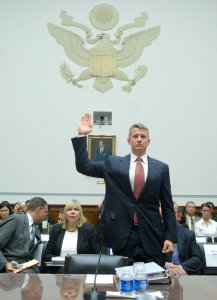 World News // 3 years ago
Blackwater founder proposes privatizing Afghanistan war
The Trump administration is considering a plan to privatize the United States' interests in the war in Afghanistan, the founder of security firm Blackwater said.

Voices // 3 years ago
Private military companies don't stand a chance against Islamic State
Western governments find themselves in a dilemma in their fight against the so-called Islamic State.
U.S. News // 6 years ago
Bill O'Reilly lashes out at Colbert for mocking his IS strategy
Bill O'Reilly responded to Stephen Colbert mocking his idea to fight the Islamic State (IS) by saying he has "no bleeping clue" about good military strategy.
Defense News // 7 years ago
Colombia worries as troops join Arab mercenary force
Colombia's defense ministry is alarmed about an exodus of top soldiers to the United Arab Emirates to join a highly paid U.S.-led mercenary force organized by Erik Prince, billionaire founder of the infamous security firm Blackwater.

We are a nation being bled dry by debt, litigation and regulation

We will not let our people be taken by the Iraqis

Erik Dean Prince (born June 6, 1969) is the American founder and was the sole owner of the private military company Xe Services LLC, formerly Blackwater Worldwide. Testifying before the United States House Committee on Oversight and Government Reform on October 2, 2007, he gave his title as chairman and CEO of the Prince Group and Blackwater Worldwide, then named Blackwater USA. On March 2, 2009, Prince announced that he was stepping down as CEO of Xe. He is currently living abroad in the United Arab Emirates, where he has been contracted to create a private military contractor force and writing his memoirs. In June 2010, he put Xe up for sale. The company was purchased on December 17, 2010 by USTC Holdings, an investment group. Prince will no longer have an equity stake in or involvement in the management or operation of Xe.

Erik Prince was born in Holland, Michigan to Edgar D. Prince and Elsa Broekhuizen. The youngest of four children, Prince has three older sisters. Prince's mother is of Dutch heritage, as was his late father (the family name, Prins, was at some point anglicized to Prince).

As a boy, Prince had a passion for the outdoors. He taught himself to trap and, in his own words, "spent a lot of time with a BB gun and a hatchet."

FULL ARTICLE AT WIKIPEDIA.ORG
This article is licensed under the GNU Free Documentation License.
It uses material from the Wikipedia article "Erik Prince."
Back to Article
/