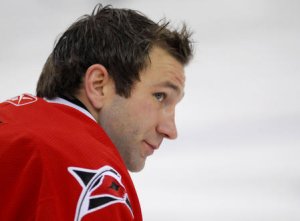 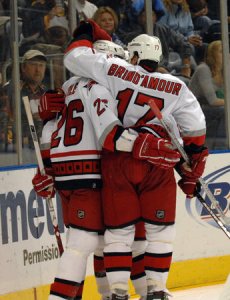 Erik Cole (born November 6, 1978) is an American professional ice hockey player currently playing for the Carolina Hurricanes of the National Hockey League (NHL). He also played a brief stint with the Edmonton Oilers before returning to Carolina in 2009.

Cole was first drafted by the Des Moines Buccaneers after a family friend, Mark Pierce, out of West Des Moines, Iowa had multiple scouts take a look. He was then drafted by the Carolina Hurricanes in the 3rd round as the 71st overall selection in the 1998 NHL Entry Draft. In the 2001–2002 NHL season, his rookie year, Cole scored six goals during the Stanley Cup Playoffs. Additionally, he was one-third of the "BBC Line" featuring Bates Battaglia and Rod Brind'Amour during the Carolina Hurricanes’ Stanley Cup run in 2002. He is the first (and as of 2010, only) Oswegonian in the NHL. Cole played college hockey for the Clarkson University Golden Knights.

On December 19, 2005, Cole was chosen to represent the United States as a player on Team USA's ice hockey team which competed in the 2006 Winter Olympics in Turin, Italy. He was named along with fellow Clarkson University alum Craig Conroy, from the Calgary Flames. He also represented Team USA at the 2007 World Championships in Moscow, Russia.

FULL ARTICLE AT WIKIPEDIA.ORG
This article is licensed under the GNU Free Documentation License.
It uses material from the Wikipedia article "Erik Cole."
Back to Article
/