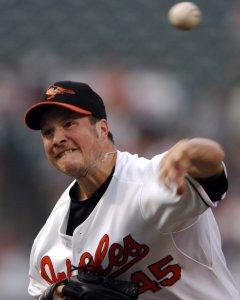 Bédard previously pitched for the Baltimore Orioles and Seattle Mariners. With Baltimore, he was the staff ace, setting the franchise single-season strikeouts per nine innings record at 10.93 in 2007.

Bédard was born on March 6, 1979 in Navan, Ontario, a suburb of Ottawa. A Franco-Ontarian, Bédard began his baseball career in the Orleans Little League and the Ontario Baseball Association. He was a pitcher on the 1992 Orleans Junior Red Sox team which beat Glace Bay in the 1992 Canadian Championship. Bédard did not play high school baseball, which is the norm in Canada due to the short season.

FULL ARTICLE AT WIKIPEDIA.ORG
This article is licensed under the GNU Free Documentation License.
It uses material from the Wikipedia article "Erik Bedard."
Back to Article
/