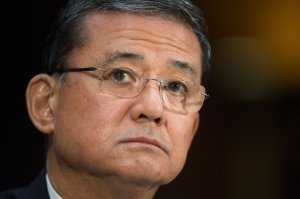 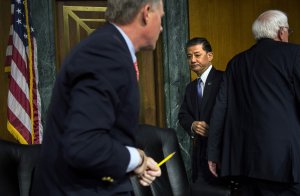 Eric Ken Shinseki (born November 28, 1942) is a retired United States Army four-star general who is currently serving as the 7th United States Secretary of Veterans Affairs. His final U.S. Army post was as the 34th Chief of Staff of the Army (1999-2003). He is a veteran of combat in Vietnam, having been left with a maimed foot. During his tenure as Army Chief of Staff, Shinseki initiated an innovative but controversial plan to make the Army more strategically deployable and mobile in urban terrain by creating Stryker Interim-Force Brigade Combat Teams. He conceived a long term strategic plan for the Army dubbed Objective Force, which included a program he designed, Future Combat Systems.

Shinseki publicly clashed with Secretary of Defense Donald Rumsfeld during the planning of the war in Iraq over how many troops the U.S. would need to keep in Iraq for the postwar occupation of that country. As Army Chief of Staff, General Shinseki testified to the U.S. Senate Armed Services Committee that "something in the order of several hundred thousand soldiers" would probably be required for postwar Iraq. This was an estimate far higher than the figure being proposed by Secretary Rumsfeld in his invasion plan, and it was rejected in strong language by both Rumsfeld and his Deputy Secretary of Defense, Paul Wolfowitz, who was another chief planner of the invasion and occupation. From then on, Shinseki's influence on the Joint Chiefs of Staff reportedly waned. The end of his term of Army Chief of Staff came in June 2003, just three months after the U.S. invasion of Iraq, and at that time General Shinseki retired from the Army after 38 years of military service.

When the insurgency took hold in postwar Iraq, Shinseki's comments and their public rejection by the civilian leadership were often cited by those who felt the Bush administration deployed too few troops to Iraq. On November 15, 2006, in testimony before Congress, CENTCOM Commander Gen. John Abizaid said that General Shinseki had been correct that more troops were needed.

FULL ARTICLE AT WIKIPEDIA.ORG
This article is licensed under the GNU Free Documentation License.
It uses material from the Wikipedia article "Eric K. Shinseki."