NBA // 2 months ago
LeBron James leads Lakers past Rockets for record 162nd playoff win
LeBron James scored 36 points in 37 minutes Tuesday night to lead the top-seeded Los Angeles Lakers to a win over the Houston Rockets and a 2-1 lead in their Western Conference semifinal series. 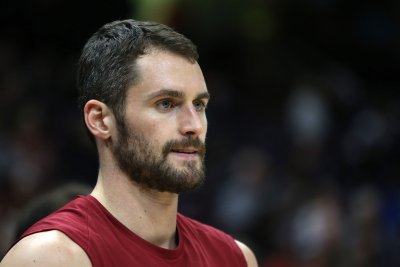 Eric Ambrose Gordon, Jr. (born December 25, 1988), nicknamed "EJ", is an American professional basketball player for the Los Angeles Clippers of the NBA. In high school, he was named "Mr. Basketball" of Indiana during his senior year while playing at North Central High School. He is known, in part, as the subject of a major recruiting battle between the University of Illinois and Indiana University in the spring and summer of 2006; because of Gordon's talent and high level of play that year, his recruitment was the subject of a great deal of media coverage.

Gordon played one season of college basketball at Indiana and was considered one of the top collegiate players in the nation that year. He finished his freshman season leading the Big Ten in scoring and tied for 19th in the nation at 21.5 points per game. Gordon entered the 2008 NBA Draft and was selected seventh overall by the Los Angeles Clippers. Gordon is represented by agent Rob Pelinka.

Born in Indianapolis, Gordon began playing sports at the YMCA at 4, playing soccer, and then moved quickly on to basketball. He also played football but his true love was basketball. At the age of 7 he began playing competitive basketball at the historical Municipal Gardens. His spent the majority of his time across the street from his home at the Jewish Community Center of Indianapolis (JCC). There Gordon spent many hours playing pick ball, swimming and hanging out with friends. It was at the JCC that Gordon announced his departure from college to enter his name into the NBA Draft.

FULL ARTICLE AT WIKIPEDIA.ORG
This article is licensed under the GNU Free Documentation License.
It uses material from the Wikipedia article "Eric Gordon."
Back to Article
/