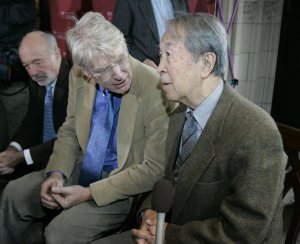 We have seen some impacts, but only a few, maybe one a month -- that's about all you'd expect

The way we think about things is about to change completely

Enrico Fermi (29 September 1901 – 28 November 1954) was an Italian-American physicist particularly known for his work on the development of the first nuclear reactor, Chicago Pile-1, and for his contributions to the development of quantum theory, nuclear and particle physics, and statistical mechanics. He was awarded the 1938 Nobel Prize in Physics for his work on induced radioactivity.

Fermi is widely regarded as one of the leading scientists of the 20th century, highly accomplished in both theory and experiment. Along with J. Robert Oppenheimer, he is frequently referred to as "the father of the atomic bomb". He also held several patents related to the use of nuclear power.

FULL ARTICLE AT WIKIPEDIA.ORG
This article is licensed under the GNU Free Documentation License.
It uses material from the Wikipedia article "Enrico Fermi."
Back to Article
/