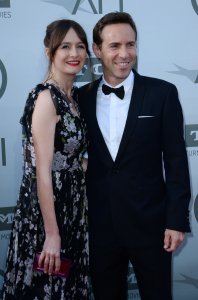 TV // 1 year ago
Lily James, Andrew Scott to star in BBC's 'Pursuit of Love'
Filming has begun in England on writer-director Emily Mortimer's adaptation of Nancy Mitford's novel "The Pursuit of Love," the BBC announced.

Emily Kathleen A. Mortimer (born 1 December 1971) is a British American actress. She began performing on stage, and has since appeared in several film and television roles, including Scream 3 (2000) and Match Point (2005).

Mortimer was born in Finsbury Park, London, England, the daughter of Sir John Mortimer QC (lawyer and dramatist famous for Rumpole of the Bailey) and his second wife, Penelope (née Gollop). She has a younger sister, Rosie; two older siblings, Sally Silverman and Jeremy, by her father's first marriage, to author Penelope Fletcher; and a half brother, Ross Bentley, by her father's liaison with actress Wendy Craig. Her maternal grandfather was a pig farmer.

Mortimer studied at St Paul's Girls' School, where she appeared in several student productions. After St. Paul's, she moved on to Lincoln College, Oxford, where she read Russian, and performed in several plays. Before becoming an actress, Mortimer wrote a column for the Daily Telegraph, and was also screenwriter for a screen adaptation of Lorna Sage's memoir, Bad Blood.

FULL ARTICLE AT WIKIPEDIA.ORG
This article is licensed under the GNU Free Documentation License.
It uses material from the Wikipedia article "Emily Mortimer."