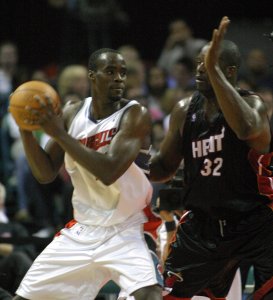 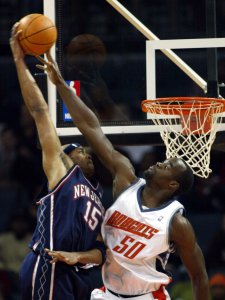 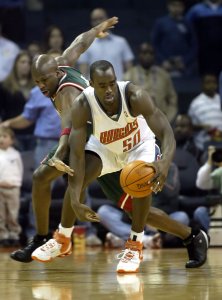 I was coming out tentative, wasn't my usual bounce self

We had a lots of ups and downs this season

They made a real good run, but we just kept our poise, kept cool, and pulled off the win

Chukwuemeka Ndubuisi Okafor, abbreviated as Emeka Okafor (eh-meh-KAH oh-KAH-FOR) (born September 28, 1982), is an American basketball player of Nigerian descent playing at power forward and center for the New Orleans Hornets of the National Basketball Association. Prior to the NBA, Okafor attended Houston's Bellaire High School, and the University of Connecticut.

Okafor was born in Houston, Texas. Both of his parents are natives of Nigeria, and Emeka was the first member of his family born in the United States. His father, Pius Okafor, is a member of the Igbo ethnic group. Okafor's family moved to Bartlesville, Oklahoma when he was young because his father worked for Phillips Petroleum Company, headquartered in Bartlesville. While in Bartlesville, Emeka's father Pius took his son to the Bartlesville YMCA to learn the game of basketball. As a child growing up in the Houston area Okafor idolized Houston Rockets shooting guard Clyde Drexler and has said he models his game after fellow Nigerian pivot Hakeem Olajuwon, though he grew up admiring Clyde Drexler.

Okafor played at Bellaire High School with future Oklahoma State star John Lucas III. Okafor averaged 22 points, 16 rebounds and 7 blocks in his senior season. Bellaire was 26–5 in that season, losing 56–42 in the third round of the 2001 UIL state playoffs, to Willowridge High School and future Texas standout T. J. Ford. This game is particularly notable, however, because it featured five players who would go on to play in an NCAA Final Four (Bellaire had Lucas and Okafor, while Willowridge featured Ford, Oklahoma State's Ivan McFarlin and Duke's Daniel Ewing). All five of these players would eventually go on to play at least a season in the NBA.

FULL ARTICLE AT WIKIPEDIA.ORG
This article is licensed under the GNU Free Documentation License.
It uses material from the Wikipedia article "Emeka Okafor."
Back to Article
/