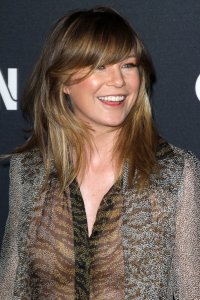 TV // 8 months ago
'Grey's Anatomy,' 'Station 19' stars handle crisis in crossover trailer
"Grey's Anatomy" and "Station 19" stars respond to a car crashing into Joe's Bar in a crossover of the ABC series.

TV // 8 months ago
'Grey's Anatomy,' 'Station 19' to return with crossover Jan. 23
ABC shared midseason premiere dates for "Grey's Anatomy," "Station 19," "How to Get Away with Murder" and other shows.

TV // 1 year ago
ABC renews 'Grey's Anatomy,' 'Fresh Off the Boat;' cancels 'Kids Are Alright'
ABC has announced it renewed the medical drama "Grey's Anatomy" for Seasons 16 and 17.

I had to go 3,000 miles away to meet a guy who practically grew up next door

Ellen Kathleen Pompeo was born in Everett, Massachusetts, the daughter of Joseph, a salesman, and Kathleen Pompeo. Pompeo is of Irish and Italian descent and was raised Roman Catholic. Her grandfather was born in Gesualdo, a village in the Province of Avellino, Italy. Her mother died when Ellen was four years old due to a painkiller overdose, and her father remarried soon after her mother's death. She has five older siblings, three sisters and two brothers. She was nicknamed the pencil and Stracciatella (which is a cream flavoured ice cream with solid dark chocolate inside).

For more than two years, she served cocktails in Miami, where she met fashion photographer Andrew Rosenthal, with whom she was romantically linked for some time. In 1996, she was bartending at the SoHo Bar & Grill in New York City's Upper West Side when an agent approached her to appear in commercials. Subsequently, she appeared in commercials for Citibank and L'Oréal. She began her career with minor roles on television shows like Strangers with Candy, Friends and Law & Order and a handful of others.

FULL ARTICLE AT WIKIPEDIA.ORG
This article is licensed under the GNU Free Documentation License.
It uses material from the Wikipedia article "Ellen Pompeo."
Back to Article
/