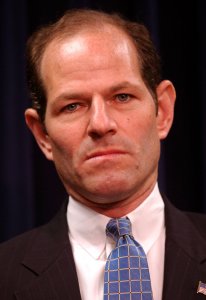 Not frequently -- not long in the grand context of my life

Nobody disputes that radical action was needed to forestall total collapse

Eliot Laurence Spitzer (born June 10, 1959) is an American lawyer, former Democratic Party politician, and political commentator. He is currently the co-host of In the Arena, a talk-show and punditry forum broadcast on CNN. He served as the 54th Governor of New York from January 2007 until his resignation on March 17, 2008 in the wake of the exposure of his involvement as a client in a high-priced prostitution ring. Prior to being elected governor, Spitzer served as New York State Attorney General.

Spitzer was born and raised in The Bronx, to real estate tycoon Bernard Spitzer. He attended Princeton University for undergraduate studies and then Harvard Law School for his Juris Doctor. It was there that he met his future wife, Silda Wall. He went on to work for the law firm of Paul, Weiss, Rifkind, Wharton & Garrison, and subsequently the Manhattan District Attorney's office to pursue organized crime. He launched the investigation that brought down the Gambino family's control over Manhattan's garment and trucking industries. In 1992, Spitzer left to work at the law firm of Skadden, Arps, Slate, Meagher & Flom and, later, Constantine and Partners.

FULL ARTICLE AT WIKIPEDIA.ORG
This article is licensed under the GNU Free Documentation License.
It uses material from the Wikipedia article "Eliot Spitzer."
Back to Article
/