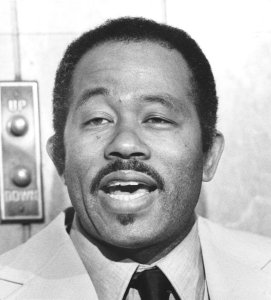 Leroy Eldridge Cleaver (August 31, 1935 – May 1, 1998) better known as Eldridge Cleaver, was a leading member of the Black Panther Party and a writer. His book Soul On Ice is a collection of essays praised by The New York Times Book Review at the time of its publication as "brilliant and revealing."

Cleaver was a prominent member of the Black Panthers, having the titles Minister of Information, and Head of the International Section of the Panthers while in exile in Cuba and Algeria. As editor of the official Panther's newspaper, Cleaver's influence on the direction of the Party was rivaled only by founders Huey P. Newton and Bobby Seale. Cleaver and Newton eventually fell out with each other, resulting in a split which weakened the Party. He later turned to the right, becoming an LDS Church member and a Republican Party member.

Born in Wabbaseka, Arkansas, as a child Cleaver moved with his family to Phoenix and then to Los Angeles. In 1967 he married Kathleen Neal Cleaver; they divorced in 1987. They had a son, Ahmad Maceo Eldridge Cleaver, and a daughter, Joju Younghi Cleaver.

FULL ARTICLE AT WIKIPEDIA.ORG
This article is licensed under the GNU Free Documentation License.
It uses material from the Wikipedia article "Eldridge Cleaver."
Back to Article
/