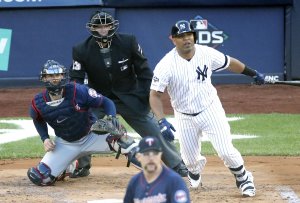 Sports News // 2 years ago
N.Y. Yankees beat Minnesota Twins 8-2, take 2-0 lead in ALDS
The New York Yankees exploded for seven runs in the third inning -- including a grand slam by shortstop Didi Gregorius -- to defeat the Minnesota Twins 8-2 in Game 2 of the American League Division Series on Saturday.

Although born in La Romana, Dominican Republic, he spent much of his youth in Puerto Rico and attended Manuela Toro High School in Caguas.

Encarnación was drafted by the Texas Rangers in the ninth round of the 2000 amateur draft and signed with them. On June 15, 2001, he was traded along with Rubén Mateo to the Cincinnati Reds in exchange for pitcher Rob Bell. He made his big league debut on June 24, 2005 and saw action in 69 games. He finished with a .232 batting average and nine home runs.

FULL ARTICLE AT WIKIPEDIA.ORG
This article is licensed under the GNU Free Documentation License.
It uses material from the Wikipedia article "Edwin Encarnacion."