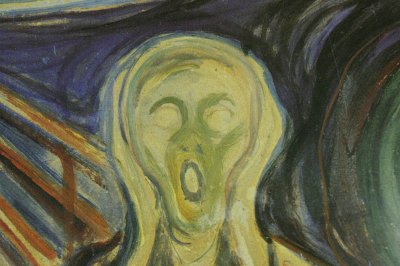 Top News // 3 years ago
The Almanac
In 2004, two masked robbers stole Edvard Munch's "The Scream" and another painting from the Munch Museum in Oslo, Norway.

Top News // 3 years ago
On This Day: Munch's 'The Scream' stolen from Oslo museum
On Aug. 22, 2004, two masked robbers stole Edvard Munch's "The Scream" and another painting from the Munch Museum in Oslo, Norway.

Top News // 4 years ago
The Almanac
On Dec. 12, 1975, Sara Jane Moore said she willfully tried to kill U.S. President Gerald Ford. She was sentenced to life in prison but released Dec. 31, 2007.
World News // 6 years ago
Ten years later: Where's 'The Scream'?
Edvard Munch's iconic painting "The Scream" was the subject of a notorious art theft on Aug. 22, 2004.
Odd News // 7 years ago
Norway's New York Christmas tree decorated with Munch's 'The Scream'
Norway chose Edvard Munch's "The Scream" as the motif this year for its annual Christmas tree installation in New York.
Entertainment News // 7 years ago
Francis Bacon triptych sells for $142.4 million
"Three Studies of Lucian Freud," a 1969 triptych by Francis Bacon, was sold to an anonymous buyer at an auction in New York for $142.4 million Tuesday.
Odd News // 7 years ago
Artist gathers hundreds to recreate 'The Scream'
A performance artist is gathering hundreds of people in the Norwegian capital to recreate Edvard Munch's "The Scream" for the artist's 150th birthday.
Consumer Corner // 8 years ago
Consumer Corner: Travelers screaming for travel, romance and better loyalty programs
Travelers are more interested in value and past experience than hotel and airline points when it comes to making reservations, a travel industry survey suggests.
World News // 8 years ago
No guards on duty night of art heist
No security guards were on duty at the Kunsthal museum in Rotterdam, Netherlands, when seven paintings were stolen, police reports indicate.

The Pursuit of Victory: The Life and Achievement of Horatio Nelso

Edvard Munch (Norwegian pronunciation: , 12 December 1863 – 23 January 1944) was a Norwegian Symbolist painter, printmaker and an important forerunner of expressionist art. His best-known composition, The Scream, is part of a series The Frieze of Life, in which Munch explored the themes of love, fear, death, melancholia, and anxiety.

Edvard Munch was born in a rustic farmhouse in the village of Ådalsbruk in Løten, Norway to Christian Munch, the son of a priest. Christian was a doctor and medical officer who married Laura Catherine Bjølstad, a woman half his age, in 1861. Edvard had an older sister, Johanne Sophie (born 1862), and three younger siblings: Peter Andreas (born 1865), Laura Catherine (born 1867), and Inger Marie (born 1868). Both Sophie and Edvard appear to have inherited their artistic talent from their mother. Edvard Munch was related to painter Jacob Munch (1776–1839) and historian Peter Andreas Munch (1810–1863).

The family moved to Christiania (now Oslo) in 1864 when Christian Munch was appointed medical officer at Akershus Fortress. Edvard’s mother died of tuberculosis in 1868, as did Munch's favorite sister Johanne Sophie in 1877. After their mother's death, the Munch siblings were raised by their father and by their aunt Karen. Often ill for much of the winters and kept out of school, Edvard would draw to keep himself occupied, and received tutoring from his school mates and his aunt. Christian Munch also instructed his son in history and literature, and entertained the children with vivid ghost-stories and tales of Edgar Allan Poe.

FULL ARTICLE AT WIKIPEDIA.ORG
This article is licensed under the GNU Free Documentation License.
It uses material from the Wikipedia article "Edvard Munch."
Back to Article
/