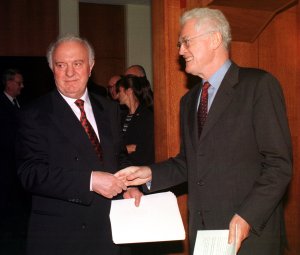 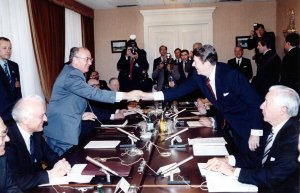 The Interior Ministry is now a much more closed structur

Protests over alleged Georgia torture May 25, 2004

You have driven him (Soros) away from Russia, and you were right. His behavior is not good. He should not poke his nose into politics in general

We know that President Shevardnadze's decision was difficult, but that he made his decision in the best interests of the people of Georgia

I believe there should be some sort of a summit meeting and also a forum of the U.N. Security Council

Eduard Shevardnadze (Georgian: ედუარდ შევარდნაძე ; born 25 January 1927 / 28 is written in papers) is a former Soviet, and later, Georgian statesman from the height to the end of the Cold War. He served as President of Georgia from 1995 to 2003, and as First Secretary of the Georgian Communist Party (GPC, the de facto leader of Soviet Georgia), from 1972 to 1985. Shevardnadze was responsible for many top decisions on Soviet foreign policy in the Gorbachev Era. He was forced to retire in 2003 as a consequence of the bloodless Rose Revolution.

Shevardnadze's political career started in the late-1940s as a leading member of his local Komsomol organisation. He was later appointed its Second Secretary, and even First Secretary. His rise up the Georgian Soviet hierarchy continued until 1961 when he was demoted after he insulted a senior official. After spending two years in obscurity Shevardnadze's returned as a First Secretary of a Tbilisi city district, and was able, to charge the Tbilisi First Secretary at the time for corruption. His anti-corruption work quickly garnered the interest of the Soviet government, and Shevardnadze was appointed to First Deputy of the Ministry of Internal Affairs of the Georgian SSR. He would later become the head of the internal affairs ministry and was successfully able to charge First Secretary (leader of Soviet Georgia) Vasil Mzhavanadze for corruption charges.

As First Secretary, Shevardandze started several economic reforms which would spur economic growth in the republic, an uncommon site in the Soviet Union because the country was experiencing a nationwide economic stagnation. Shevardnadze anti-corruption continued until he resigned from his office as First Secretary. Mikhail Gorbachev appointed Shevardnadze to the post of Minister of Foreign Affairs. From there one, with the exception of a brief period between 1990 and 1991, Shevardnadze would be second most important person in Soviet foreign policy, surpassed only by Gorbachev in importance.

FULL ARTICLE AT WIKIPEDIA.ORG
This article is licensed under the GNU Free Documentation License.
It uses material from the Wikipedia article "Eduard Shevardnadze."
Back to Article
/