Top News // 4 years ago
The Almanac
On Jan. 19, 1961, President Dwight Eisenhower met with his successor, President-Elect John F. Kennedy, to complete plans for the transition of power.

Horse Racing // 4 years ago
UPI Horse Racing Weekend Preview
Frosted and Effinex square off in a Grade I battle at Saratoga and Hong Kong star Gold-Fun takes on the Euros in France in highlights of weekend Thoroughbred racing. 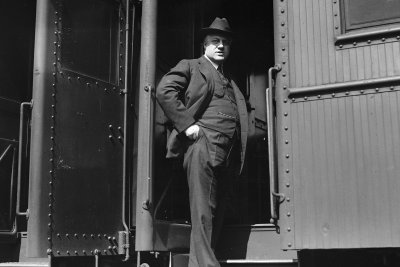 Top News // 5 years ago
The Almanac
On Jan. 19, 1920, threats against the life of Attorney General A. Mitchell Palmer led officials to take every precaution to guard the head of the Justice Department.

In the spirit of fairness, the family simply cannot agree to move the body just yet

Edgar Allan Poe (January 19, 1809 – October 7, 1849) was an American writer, poet, editor and literary critic, considered part of the American Romantic Movement. Best known for his tales of mystery and the macabre, Poe was one of the earliest American practitioners of the short story and is considered the inventor of the detective-fiction genre. He is further credited with contributing to the emerging genre of science fiction. He was the first well-known American writer to try to earn a living through writing alone, resulting in a financially difficult life and career.

He was born as Edgar Poe in Boston, Massachusetts; he was orphaned young when his mother died shortly after his father abandoned the family. Poe was taken in by John and Frances Allan, of Richmond, Virginia, but they never formally adopted him. He attended the University of Virginia for one semester but left due to lack of money. After enlisting in the Army and later failing as an officer's cadet at West Point, Poe parted ways with the Allans. His publishing career began humbly, with an anonymous collection of poems, Tamerlane and Other Poems (1827), credited only to "a Bostonian".

Poe switched his focus to prose and spent the next several years working for literary journals and periodicals, becoming known for his own style of literary criticism. His work forced him to move between several cities, including Baltimore, Philadelphia, and New York City. In Baltimore in 1835, he married Virginia Clemm, his 13-year-old cousin. In January 1845 Poe published his poem "The Raven" to instant success. His wife died of tuberculosis two years after its publication. He began planning to produce his own journal, The Penn (later renamed The Stylus), though he died before it could be produced. On October 7, 1849, at age 40, Poe died in Baltimore; the cause of his death is unknown and has been variously attributed to alcohol, brain congestion, cholera, drugs, heart disease, rabies, suicide, tuberculosis, and other agents.

FULL ARTICLE AT WIKIPEDIA.ORG
This article is licensed under the GNU Free Documentation License.
It uses material from the Wikipedia article "Edgar Allan Poe."
Back to Article
/