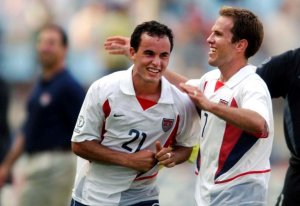 Lewis attended Cerritos High School, and played college soccer at UCLA, leading his team in scoring in 1995. He was drafted by the then-San Jose Clash in the third round of the 1996 MLS College Draft. He would spend the next four years in San Jose, becoming a full-time starter in his second season. Originally a forward, the lefty moved to the midfield early on in his pro career. In his time with the Clash, he scored nine goals and added 35 assists in 115 games and was named to the MLS Best XI in 1999.

FULL ARTICLE AT WIKIPEDIA.ORG
This article is licensed under the GNU Free Documentation License.
It uses material from the Wikipedia article "Eddie Lewis."