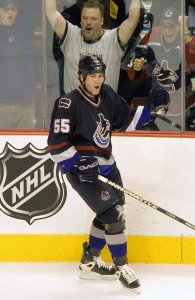 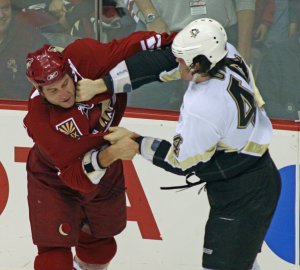 People have a right to say what they want to say, but we know as a team we have a great hockey club and if we put our minds to it and play the way we did tonight, things look good for us

Edvard Jovanovski (born June 26, 1976) is a Canadian professional ice hockey defenceman and an alternate captain of the Phoenix Coyotes of the National Hockey League (NHL).

He played major junior for two seasons with the Windsor Spitfires of the Ontario Hockey League (OHL), earning First All-Star, Second All-Star and All-Rookie Team honours. He was selected first overall in the 1994 NHL Entry Draft by the Florida Panthers. During his rookie season, he earned All-Rookie Team honours and helped the Panthers advance to the Stanley Cup Finals, where they lost to the Colorado Avalanche. After three-and-a-half seasons in Florida, Jovanovski was traded to the Vancouver Canucks in a seven-player deal for Pavel Bure. During his tenure with Vancouver, he was awarded the Babe Pratt Trophy as the team's best defenceman three consecutive years. He also led the club's defencemen in scoring four consecutive years. In July 2006, Jovanovski became an unrestricted free agent and signed with the Coyotes. He led the team's defencemen in scoring during his first three years with the club. Known as a two-way defenceman, he has recorded three 40-point and one 50-point campaign in the NHL.

Internationally, Jovanovski plays for the Canadian national team. A one-time Winter Olympian, he won a gold medal at the 2002 Games in Salt Lake City. At the under-20 level, he won gold at the 1995 World Junior Championship. He went on to play in four Men's World Championships, winning silver in 2005 and 2008. He also represented Canada at the 2004 World Cup, playing in one game due to injury in the championship-winning tournament.

FULL ARTICLE AT WIKIPEDIA.ORG
This article is licensed under the GNU Free Documentation License.
It uses material from the Wikipedia article "Ed Jovanovski."
Back to Article
/