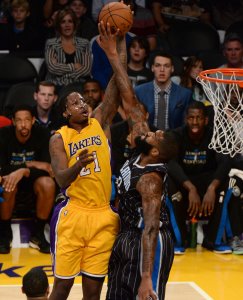 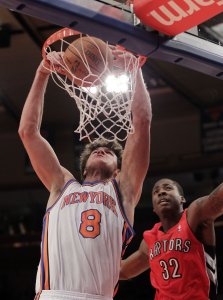 NBA // 1 year ago
Struggling Rockets try to get on track vs. Trail Blazers
HOUSTON -- Atop the list of early surprises two weeks into the season is the wayward start of the team that produced the best record in the league last season, a squad expected to challenge for Western Conference supremacy despite a handful of cosmetic roster changes.

NBA // 1 year ago
Nets try to slow rising Pelicans
The New Orleans Pelicans are off to a 3-0 start as the highest-scoring team in the NBA.

NFL // 1 year ago
Knicks-Nets clash comes with big buildup
NEW YORK -- These days, the rivalry between the New York Knicks and Brooklyn Nets can be defined by rebuilding projects and getting their respective rosters on the road to playoff contention.

NBA // 2 years ago
Russell Westbrook involved in Thunder, Blazers melee
Technical fouls were handed out like Halloween candy after a scuffle during the Portland Trail Blazers and Oklahoma City Thunder game.

NBA // 2 years ago
Rockets, Trail Blazers on rolls heading into matchup
The team with the NBA's best record -- the Houston Rockets -- comes calling to Moda Center Tuesday night, and the Portland Trail Blazers mean no disrespect. 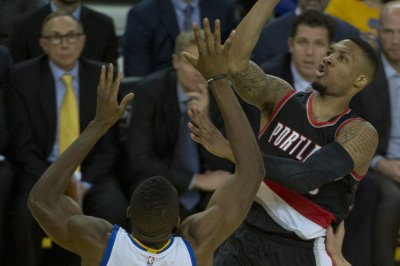 NBA // 3 years ago
Damian Lillard leads Portland Trail Blazers past Boston Celtics in OT
BOSTON -- It would have been easy for them to mail in Saturday's end to a four-game road trip, hop on their charter and fly home.

NBA // 3 years ago
Damian Lillard helps Portland Blazers to 10th straight win over Los Angeles Lakers
LOS ANGELES -- After missing nine of 10 shots and scoring only two points in the first half, Damian Lillard didn't need any extra motivation in the second half.

Sports News // 3 years ago
No. 12 Michigan State hangs on to defeat No. 18 Notre Dame
SOUTH BEND, Ind. -- Michigan State running back Gerald Holmes could not hide his emotions when he learned about the death of his grandmother earlier this week.

Edward Adam "Ed" Davis (born June 5, 1989 in Washington, D.C.) is a professional basketball player who currently plays for the Toronto Raptors. He played high school basketball at Benedictine High School in Richmond, Virginia. He is the son of former NBA player Terry Davis, who played 10 seasons (1989–2001) in the NBA with the Miami Heat, Dallas Mavericks, Denver Nuggets and Washington Wizards. Davis is considered by scouts as a dynamic scorer around the basket due to his smooth play and left-handed shot. Not only known for his offense, scouts praise his shot blocking and rebounding abilities. He was selected with the 13th overall pick in the 2010 NBA Draft by the Toronto Raptors.

Ed Davis spent his first two years of high school playing basketball at Hanover High School (Mechanicsville, Virginia) before transferring to Benedictine High School. There, he led Benedectine to two state championships while averaging 22 points, 14 rebounds and 7 blocks as a senior. He accompanied former Tar Heel teammates Tyler Zeller and Larry Drew II in the McDonald's All-American Game and was selected to the Jordan Brand All-American Team. Davis and Zeller were also named to the 2008 Parade All-American Boy's Basketball Team. He was named Mr. Basketball of Virginia in 2008, which is given to Virginia's best high school basketball player. He also received recognition as co-player of the year in 2007.

Ed Davis played in every game during the 2008–2009 season, while starting in two of them. He averaged 6.7 points, 7.0 rebounds, and 18.8 minutes per game in his first season with the Tar Heels. Davis also led the team with 65 blocks with an average of 1.7 per game. In North Carolina's six wins during the 2009 NCAA Basketball Tournament, Davis averaged 8.2 points and 5.5 rebounds. In the 2009 NCAA Championship, Davis came off the bench to score 11 points and grab a team-high 8 rebounds, helping the Tar Heels to a 89–72 win over Michigan State. Davis was also named to the 2009 All-Freshman Team and was co-recipient of the team's Most Improved Player award.

FULL ARTICLE AT WIKIPEDIA.ORG
This article is licensed under the GNU Free Documentation License.
It uses material from the Wikipedia article "Ed Davis."
Back to Article
/