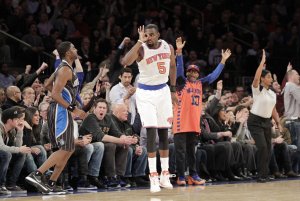 NBA // 2 years ago
Heat close out long road trip against Pelicans
The Miami Heat are concluding a lengthy road trip. The New Orleans Pelicans are about to embark on one.

NBA // 2 years ago
Andrew Wiggins kicks defender during poster dunk
Minnesota Timberwolves guard Andrew Wiggins did his best Draymond Green impression by kicking away a defender while dunking on the New Orleans Pelicans.

NBA // 2 years ago
Pelicans aim to build on solid opener vs. Kings
The New Orleans Pelicans had perhaps the most impressive opening-night performance of any team in the NBA.

NBA // 2 years ago
Pelicans look to stand tall again vs. Warriors
NEW ORLEANS -- They have a pulse, and now the New Orleans Pelicans feel they have a chance.

NBA // 3 years ago
Pelicans try for 'tripleheader' sweep vs. Lakers
NEW ORLEANS -- Two down, one to go.

NBA // 3 years ago
Pelicans hope to regain footing vs. banged-up Celtics
NEW ORLEANS -- It wasn't too long ago that the New Orleans Pelicans had won 10 consecutive games to climb to as high as the third seed in the Western Conference playoff race.

E'Twaun Donte Moore (born February 25, 1989) is an American collegiate basketball player at Purdue University, located in West Lafayette, Indiana. He is currently playing his senior season for the 2010–11 Purdue Boilermakers men's basketball team. He formerly played for Central High School in East Chicago, Indiana, for whom he led to the state championship and was the recipient for the Trester Award.

Born in East Chicago, Indiana, Moore attended Central High School where he played basketball. He averaged 21.2 points, 5.5 rebounds and 3.3 assists a game his Senior year. That same season, along with 6'11" teammate Angel Garcia, he led his team to the 2007 4A State Championship by scoring 28 points against Indianapolis North Central High School, which starred 2007 Indiana Mr. Basketball and current NBA player, Eric Gordon. Moore earned the tournament's Trester Award. Moore was named to the Indiana All-Star Team.

FULL ARTICLE AT WIKIPEDIA.ORG
This article is licensed under the GNU Free Documentation License.
It uses material from the Wikipedia article "E'Twaun Moore."
Back to Article
/