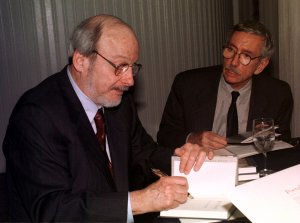 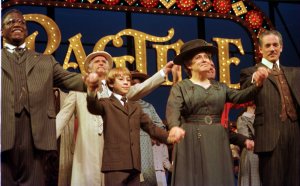 Edgar Lawrence Doctorow (born January 6, 1931, New York, New York) is an American author whose critically acclaimed and award-winning fiction ranges through his country’s social history from the Civil War to the present.

Edgar Lawrence Doctorow was born in the Borough of the Bronx, New York City, the son of second-generation Americans of Russian Jewish descent. He attended the city’s grade schools and then the Bronx High School of Science where, surrounded by mathematically gifted children, he fled to the office of the school literary magazine, Dynamo, where he published his first literary effort, The Beetle, which he describes as ”a tale of etymological self-defamation inspired by my reading of Kafka.”

Doctorow attended Kenyon College, where he studied with the poet and New Critic, John Crowe Ransom, acted in college theater productions and majored in Philosophy. After graduating with Honors in 1952 he did a year of graduate work in English Drama at Columbia University before being drafted into the army. He served with the Army of Occupation in Germany in 1954-55 as a corporal in the signal corps.

FULL ARTICLE AT WIKIPEDIA.ORG
This article is licensed under the GNU Free Documentation License.
It uses material from the Wikipedia article "E.L. Doctorow."
Back to Article
/