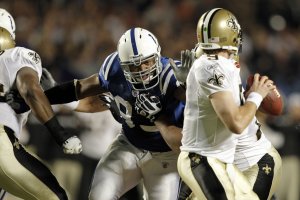 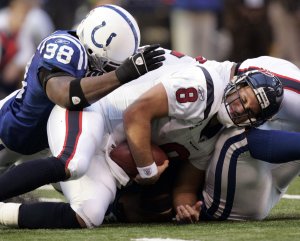 NFL // 4 years ago
Free-Agent Setup: DE Ansah key among Lions' 17 UFAs
Seven of the Detroit Lions' 17 unrestricted free agents played key roles on defense in 2017, and with new head coach Matt Patricia overhauling the unit, many of those players won't return this fall.

NFL // 4 years ago
Seattle Seahawks: Coaching decision haunts in loss
A failed fake field-goal try and a pair of wasted timeouts in the second half were among strategic errors by the Seattle Seahawks.

I'm doing everything, trying to find the best thing to get (my ankle) feeling as good as possible

Dwight Jason Freeney (born February 19, 1980 in Hartford, Connecticut) is an American football defensive end who currently plays for the Indianapolis Colts of the National Football League. He was drafted in the 1st round of the 2002 NFL Draft. He played college football at Syracuse University.

Freeney attended Bloomfield High School in Bloomfield, Connecticut. Freeney was a four sport letterman, getting four letters in baseball and basketball.Freeney was coached in baseball by Alphonso Ford. three in football (where he played both ways) and one in soccer (he lettered as goalie his freshman year but switched over to football during his sophomore year). Freeney currently holds the record for sacks at his high school. Bloomfield retired his #44 football jersey. During his youth, Freeney idolized New York Giants linebacker Lawrence Taylor, whom he met at a charity golf tournament after turning pro.

A 2-year starter at Syracuse University, Freeney set a school record with 17.5 sacks in his senior season and his 34 career sacks rank first in school history. Freeney was the school's premier pass rusher, and once had a string of 17 consecutive games with at least one sack. Against Virginia Tech and Michael Vick, Freeney sacked the elusive Vick 4.5 times in one game.

FULL ARTICLE AT WIKIPEDIA.ORG
This article is licensed under the GNU Free Documentation License.
It uses material from the Wikipedia article "Dwight Freeney."