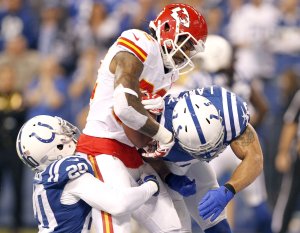 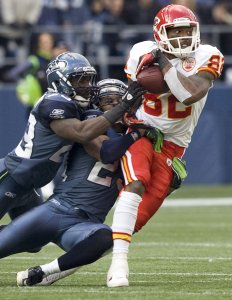 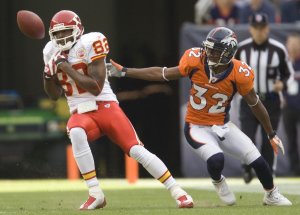 College Football // 3 years ago
Florida State Seminoles 2017 season preview, schedule, players to watch
It doesn't get better than Florida State vs. Alabama to start the season.

Sports News // 5 years ago
Kansas City Chiefs clinch playoff berth with ninth straight win
When the Kansas City Chiefs were 1-5 and heading into the final 10 games on their schedule, there wasn't anybody talking about them making the playoffs.

Sports News // 5 years ago
Defense bails out unbeaten Denver Broncos
CLEVELAND - The top-ranked defense in the NFL was at its best when it had to be on Sunday to keep the Denver Broncos undefeated with a hard-earned 26-23 overtime victory over the Cleveland Browns.

Dwayne Lorenzo Bowe (born September 21, 1984 in Miami, Florida) is an American football wide receiver for the Kansas City Chiefs of the National Football League. He was drafted by the Chiefs 23rd overall in the 2007 NFL Draft. He played college football at Louisiana State.

Born to an unwed mother and a largely absent father, Dwayne Bowe and his older brother Wayne were raised by their paternal grandparents, Kim and Dorothy Williams in Miami, Florida. At Parkway Middle school, Bowe struggled with academics and was involved with street gangs and fighting. He grew into a big, athletic teenager but was not involved in sports until his junior year in high school, when he was hospitalized after being beaten badly in a nightclub fight. As a way to give up fighting, Dwayne decided to join the high school football team at Miami Norland High School. In his very first game, he returned a kickoff 101 yards for a touchdown. Later, Bowe accepted an offer from Nick Saban to play for Louisiana State University on an athletic scholarship.

Regarded as one of the top wide receivers available in the 2007 NFL Draft, Bowe drew comparisons to Hines Ward. He was selected 23rd overall by the Kansas City Chiefs. Alongside his former teammates JaMarcus Russell and Craig Davis, the trio became the first quarterback/wide receiving group to be selected in the draft.

FULL ARTICLE AT WIKIPEDIA.ORG
This article is licensed under the GNU Free Documentation License.
It uses material from the Wikipedia article "Dwayne Bowe."
Back to Article
/