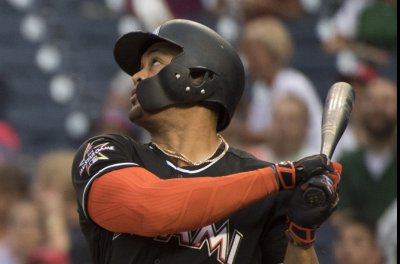 MLB // 2 years ago
Maikel Franco's home run highlights Philadelphia Phillies' win over Miami Marlins
Maikel Franco made an adjustment, and it paid off.

Sports News // 3 years ago
Tanner Roark wins No. 16; Washington Nationals edge Miami Marlins 2-1
WASHINGTON -- As the game came to end, Trea Turner followed Bryce Harper back to the first-base dugout as the two did high fives.

Sports News // 4 years ago
Pittsburgh Pirates squeeze past Philadelphia Phillies in extra innings
Starling Marte singled in Chris Stewart with the game's only run in the 13th inning and the Pittsburgh Pirates beat the Philadelphia Phillies 1-0 in a battle of struggling offenses at PNC Park.
Sports News // 5 years ago
Blue Jays come out over Brewers
Drew Hutchison allowed only one run over seven innings to help lead the Toronto Blue Jays over the Milwaukee Brewers, 4-1, in the opener of a two-game series on Tuesday afternoon.
Sports News // 5 years ago
Blue Jays defeat Detroit Tigers 5-3
The Toronto Blue Jays rallied late to top the Detroit Tigers, 5-3, in the opener of a three-game set from Comerica Park.
Sports News // 5 years ago
Cleveland Indians defeat Toronto 15-4
David Murphy went 5-for-6 with five RBI to lead the Cleveland Indians to a 15-4 drubbing of the Toronto Blue Jays in the middle test of a three-game set.
Sports News // 6 years ago
MLB: Toronto 4, Boston 2
Toronto's Mark Buehrle handcuffed Boston's batters Saturday, limiting the Red Sox to one run over six innings in the Blue Jays' 4-2 win.

Dustin Michael McGowan (born March 24, 1982, Savannah, Georgia) is a baseball player, currently a pitcher for Toronto Blue Jays. Drafted by the Toronto Blue Jays out of Long County High School in Ludowici, in the 1st round with 33rd pick of the draft on June 4, 2000. He made his major-league debut on July 30, 2005 against the Texas Rangers and received a no decision in an impressive performance when he logged 5 innings, allowing just 1 run while striking out 6, the most number of strikeouts by a Toronto starter in his Major League debut..

McGowan throws primarily a four-seam fastball in the 94-96mph range and sometimes as fast as 98mph. He uses his above-average velocity fastball to challenge hitters at the plate, and throws a sinking fastball as well a 4-seamer. McGowan also throws a hard slider that ranges in the high 80s to 90mph, a power curve with great tumbling action, and a change-up with good late movement as well.

One of McGowan's vulnerabilities is his slow delivery, as his high leg kick makes him susceptible to base-stealers. McGowan allowed 29 stolen bases in 27 starts in 2007, and only one runner was caught stealing while he was on the mound.

FULL ARTICLE AT WIKIPEDIA.ORG
This article is licensed under the GNU Free Documentation License.
It uses material from the Wikipedia article "Dustin McGowan."
Back to Article
/