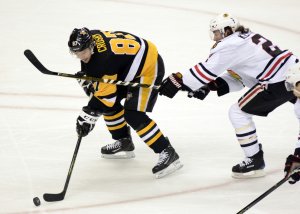 NHL // 2 years ago
Roles reversed in Avalanche-Blackhawks game
In the years the Chicago Blackhawks were annual Stanley Cup contenders, the Colorado Avalanche seemed to find ways to beat them despite being a perennial lottery team.

NHL // 3 years ago
Chicago Blackhawks rally past Florida Panthers in OT
The Chicago Blackhawks' quality of play isn't where Joel Quenneville would like, but when they find ways to win games like they have lately, the coach takes it as a step in the right direction.

Duncan Keith (born July 16, 1983) is a Canadian professional ice hockey defenceman who is an alternate captain for the Chicago Blackhawks of the National Hockey League. Keith was drafted 54th overall by Chicago in the 2002 NHL Entry Draft. He spent two seasons with the Norfolk Admirals of the American Hockey League (AHL) before joining the Blackhawks in 2005–06. Internationally, he has represented Canada on two occasions, winning a gold medal at the 2010 Winter Olympics in Vancouver. Keith is known as a two-way defenceman, capable in both shutdown and offensive roles. Keith was awarded the 2010 Norris Trophy which is given to the NHL's most outstanding defenceman of the year. Keith also captured a Stanley Cup in 2010 with the Blackhawks.

Keith was born to Dave and Jean Keith. He was a middle child, with older brother Cameron (born in 1981) and younger sister Rebecca (born in 1984). His family moved to Fort Frances, Ontario, in 1985 after his father was transferred from Winnipeg for an assistant manager position at a Canadian Imperial Bank of Commerce (CIBC) branch. Keith's mother worked in the health field at Rainycrest Home for the Aged in Fort Frances.

He grew up as a Boston Bruins fan, singling out defenseman Ray Bourque and forward Cam Neely as his favorite players, as well as Wayne Gretzky. Keith played minor hockey in the Fort Frances Minor Hockey Association along with his brother. Initially beginning as a forward with the Fort Frances Times Tigers, he has recalled switching to defense at the age of eight or nine. He went on to play AA Atom with Pinewood Sports and Marine Ltd and PeeWee with the Knights of Columbus. After Keith established himself in the NHL, the town of Fort Frances recognized his success by declaring July 21, 2008, "Duncan Keith Day."

FULL ARTICLE AT WIKIPEDIA.ORG
This article is licensed under the GNU Free Documentation License.
It uses material from the Wikipedia article "Duncan Keith."
Back to Article
/