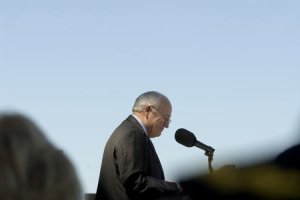 Randall Harold Cunningham (born December 8, 1941), usually known as Randy or Duke, was a Republican member of the United States House of Representatives from California's 50th Congressional District from 1991 to 2005.

Cunningham resigned from the House on November 28, 2005 after pleading guilty to accepting at least $2.4 million in bribes and underreporting his income for 2004. He pleaded guilty to federal charges of conspiracy to commit bribery, mail fraud, wire fraud, and tax evasion. On March 3, 2006, he received a sentence of eight years and four months in prison and an order to pay $1.8 million in restitution. Prior to his political career, he was an officer in the United States Navy for 20 years during which time he became a flying ace for actions during the Vietnam War.

Cunningham was born in Los Angeles to Randall and Lela Cunningham, who both moved there from Oklahoma during the Depression. His father was a truck driver for Union Oil at the time. Around 1945, the family moved to Fresno, California where Cunningham's father purchased a gas station. In 1953, they moved again, this time to rural Shelbina, Missouri, where his parents purchased and managed the Cunningham Variety Store, a five-and-dime. In Shelbina, Cunningham relished the times he spent hunting pheasant and deer with his father.

FULL ARTICLE AT WIKIPEDIA.ORG
This article is licensed under the GNU Free Documentation License.
It uses material from the Wikipedia article "Duke Cunningham."
Back to Article
/