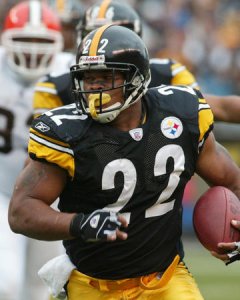 NFL // 5 months ago
Eagles' Doug Pederson becomes second NFL coach to get coronavirus
Philadelphia Eagles coach Doug Pederson has tested positive for COVID-19 and will be absent from the team's training camp while in quarantine at his home.

NFL // 2 years ago
Eagles' Duce Staley only focused on one title
Duce Staley was hoping to move up the coaching ladder after being part of a Super Bowl-winning staff with the Philadelphia Eagles last season.

NFL // 2 years ago
Notebook: Seahawks agree to trade Bennett to Eagles
The Philadelphia Eagles will acquire defensive end Michael Bennett and a seventh-round draft pick from the Seattle Seahawks in exchange for wide receiver Marcus Johnson and a fifth-round pick, multiple outlets reported on Wednesday.

I think that's a sign that I'm working my way back

Duce Staley (born February 27, 1975 in Lexington, South Carolina) is a former American football running back in the National Football League best known for his tenure with the Philadelphia Eagles. He works as a sideline reporter for football radio broadcasts of the University of South Carolina on the Gamecock Sports Radio Network. Staley also hosts a daily sports talk program called "The Halftime Show" from 1 to 4 PM on 107.5 the Game, WNKT FM, in Columbia, South Carolina.

Staley attended Airport High School in West Columbia, South Carolina and was an All-State wide receiver, as he did not play running back until college.

FULL ARTICLE AT WIKIPEDIA.ORG
This article is licensed under the GNU Free Documentation License.
It uses material from the Wikipedia article "Duce Staley."
Back to Article
/