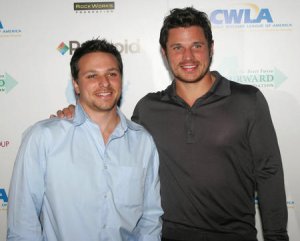 TV // 8 months ago
'DWTS' pro Cheryl Burke reflects on 'life-altering decision' to get sober
Cheryl Burke discussed her sobriety and how her "Dancing with the Stars" partner AJ McLean has inspired her.

Music // 3 years ago
98 Degrees to release new Christmas album Oct. 13
"Let it Snow," a 12-track Christmas album by 98 Degrees, is set for release on Oct. 13 via UMe.
TV // 6 years ago
Nick Lachey, brother Drew to star on 'Lachey's Bar'
New A&E reality series "Lachey's Bar" will follow 98 Degrees singers Nick Lachey and brother Drew as they open a bar in their hometown of Cincinnati, Ohio.
Entertainment News // 8 years ago
People in the news
The latest news on today's hottest celebrities ...
TV // 8 years ago
Helio, Drew get the ax on 'DWTS'
Helio Castroneves and Drew Lachey -- along with their professional dance partners -- were eliminated from "Dancing with the Stars" in Los Angeles.
TV // 8 years ago
Fatone gets the boot from 'DWTS'
Singer Joey Fatone and his professional dance partner Kym Johnson were eliminated from "Dancing with the Stars" in Los Angeles Tuesday night.
TV // 8 years ago
Alley, Palin, Lachey going 'Dancing' again
Bristol Palin, Joey Fatone, Kirstie Alley and Apolo Ohno are to compete on the all-star edition of "Dancing with the Stars" in Los Angeles, ABC said.
TV // 1 decade ago
'DWTS' to celebrate 200th episode
Past contestants Kelly Osbourne, Mel B, Drew Lachey and Emmit Smith will return for next week's 200th episode of "Dancing with the Stars" in Los Angeles.
Entertainment News // 1 decade ago
Lachey named host of HGTV show
U.S. singer and reality TV star Drew Lachey has been named the host of "HGTV's $250,000 Challenge," a new competition series.
Entertainment News // 1 decade ago
Lachey, Collins join 'Spamalot' cast
Singer and "Dancing with the Stars" winner Drew Lachey is to join the cast of "Monty Python's Spamalot," representatives for the Broadway musical said Monday.

In terms of TV and for the ratings that the show gets, it's ridiculous

Andrew "Drew" John Lachey (born August 8, 1976) is an American singer and actor, known as a member of 98 Degrees, the winner of the second season of Dancing with the Stars, and the younger brother of Nick Lachey.

Drew Lachey was born in Cincinnati, Ohio. He was a combat medic in the United States Army, was an Emergency medical technician (EMT) in NYC, worked in a deli, and was a camp counselor at the age of 16.

He was a member of the pop group 98 Degrees, alongside his brother Nick Lachey, and other band members, Justin Jeffre and Jeff Timmons. Since 98 Degrees, Lachey made a guest appearance on Hollywood Squares in 2001, performed on Broadway as Mark Cohen in the musical Rent from January 3 to March 21, 2005, and has also had several guest appearances on Nick's MTV show Newlyweds: Nick and Jessica. In June 2008, Lachey joined the Broadway company of Monty Python's Spamalot as Patsy, the faithful manservant to King Arthur and stayed with the show for three months.

FULL ARTICLE AT WIKIPEDIA.ORG
This article is licensed under the GNU Free Documentation License.
It uses material from the Wikipedia article "Drew Lachey."
Back to Article
/