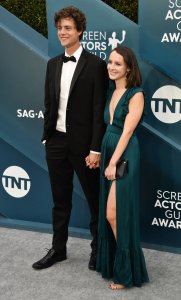 Top News // 1 decade ago
Washington Agenda-General
UNITED PRESS INTERNATIONAL
Science News // 1 decade ago
Coasters not linked to brain injury
Although there have been a few isolated reports of people suffering brain injuries from riding roller coasters, a new mathematical model released Wednesday suggests the amusement park rides do not pose a safety hazard.

Douglas Alexander Smith (born June 22, 1985) is a Canadian-American actor most notable for his work on the HBO series, Big Love as Ben Henrickson, the eldest son of polygamist Bill Henrickson.

Smith was born in Toronto, Ontario, Canada, the son of Terrea (née Oster), an American teacher, and Maurice Smith, a British-born, Vancouver-based producer of low-budget films. Smith's mother appeared in several of the films that his father produced during the 1980s. He is the younger brother of Gregory Smith. As a teenager, he went to Australia to play the lead role as an American boy living in Australia in a series called Out There. In addition to being a series regular on Big Love, Smith has also co-starred in the films Sleepover, Rock the Paint, Santa's Slay and State's Evidence. Smith has also guest starred on several television series including CSI: Crime Scene Investigation Season 6 Episode 18: The Unusual Suspect and Season 8 Episode 7: Goodbye and Good Luck as Marlon West, CSI Miami, Close to Home, Everwood, Joan of Arcadia, The X-Files, Crossing Jordan, and Cold Case. He was also in Remember the Daze. He also appeared in The Hangman's Curse as Elijah Springfield.

He is also in a band called "Alaskan Summer", with girlfriend Ashton Lunceford.

FULL ARTICLE AT WIKIPEDIA.ORG
This article is licensed under the GNU Free Documentation License.
It uses material from the Wikipedia article "Douglas Smith."
Back to Article
/