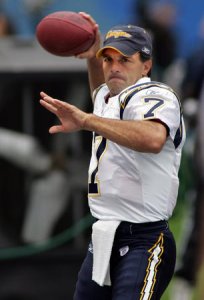 NFL // 4 years ago
Sports broadcasting icon Brent Musburger to retire at age 77
At age 77, broadcaster Brent Musburger is ready to step away from the microphone following decades as a marquee voice in sports.

NFL // 4 years ago
NFL Week 1 Predictions: Who will win Giants-Cowboys, Eagles-Browns, all other games
NFL Week 1 picks and predictions for all games on Sunday and Monday.

I had more fun playing football in Canada in my career, especially the last two years in Toronto

It was fun to hear it from the crowd, step into a situation where we are behind and we have an opportunity to go out and win a ballgame

We fought our tails off and they have a great defense

We had a chance to make plays, we just didn't

Douglas Richard "Doug" Flutie (born October 23, 1962) is a former American and Canadian football quarterback. Flutie played college football at Boston College, and played professionally in the National Football League, Canadian Football League, and United States Football League. He first rose to prominence during his career at Boston College, where he received the prestigious Heisman Trophy and the Davey O'Brien National Quarterback Award in 1984. His Hail Mary touchdown pass in a game against Miami on November 23, 1984 (dubbed "Hail Flutie") is considered among the greatest moments in college football and American sports history. Selected as the 285th pick in the 11th round, Flutie is the lowest drafted Heisman Award winner among those who were drafted. Flutie played that year for the New Jersey Generals of the upstart United States Football League. In 1986 he signed with the NFL's Chicago Bears, and later played for the New England Patriots, becoming their starting quarterback in 1988.

Flutie signed with the BC Lions of the Canadian Football League in 1990, and in 1991, threw for a record 6,619 yards. He played briefly with his brother Darren, a wide receiver, before being traded to the Calgary Stampeders, whom he led to victory in the 1992 Grey Cup. In 1994, he threw a record 48 touchdown passes. Flutie played for the Stampeders until 1996, when he signed with the Toronto Argonauts, leading them to back-to-back Grey Cup victories in 1996 and 1997. Flutie was named the CFL's Most Outstanding Player a record six times, and was named the MVP in all three of his Grey Cup victories.

He returned to the NFL in 1998 with the Buffalo Bills, where he earned Pro Bowl and NFL Comeback Player of the Year honors. He played for the San Diego Chargers from 2001 to 2004, and finished his career as a member of the New England Patriots in 2005. In 2006, he was ranked #1 in a list of the top 50 CFL players. He was named to the College Football Hall of Fame and Canada's Sports Hall of Fame in 2007. He ranks sixth or seventh among the all-time professional gridiron passing leaders combining his CFL/NFL/USFL seasons for attempts, completions, yards, and touchdowns.

FULL ARTICLE AT WIKIPEDIA.ORG
This article is licensed under the GNU Free Documentation License.
It uses material from the Wikipedia article "Doug Flutie."
Back to Article
/